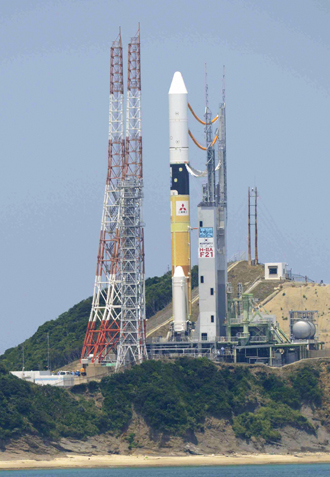 The Arirang-3 satellite is set up on the launch pad at the Tanegashima Space Center located south of Kyushu Island, Japan, yesterday. The multipurpose satellite is scheduled to lift off at 1:39 a.m. today. The Ministry of Science and Technology of Korea said if the launch is successful, the satellite will separate from the rocket 16 minutes later and make initial contact with the Troll and Svalbard satellite stations located in Antarctica and Norway, respectively, before it sends signals to the Daejeon-based Korea Automotive Research Institute (Kari) at around 3:19 a.m. The satellite has an electro-optical camera with a resolution of around 70 centimeters (27 inches) that can give Seoul the ability to take precise pictures of weather-front developments and the earth’s surface. The satellite is expected to stay operational for four years and can also be used to enhance national security, cope with natural disasters, better manage resources and monitor the environment. The 980-kilogram (2,160-pound) satellite will be placed in a low orbit 685 kilometers (425 miles) from the earth’s surface by Japan’s H-IIA rocket. The ministry said the Arirang-3, to be operated by the Kari, will be the country’s first high-resolution sub-meter satellite. At present, only a handful of countries in Europe and the United States have commercial satellites with such high resolution. [YONHAP]