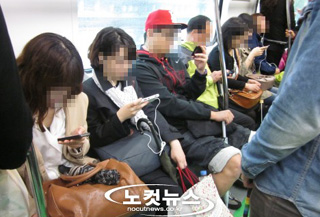 From morning until midnight, Kim Min-jung, a 23-year-old university student, hardly ever unclenches her smartphone.

As a senior looking for a job after graduation, she searches for job-related information on her phone on her way to and from classes. She also uses a laptop to write papers.

After a few too many years of a connected life, however, Kim’s neck started to feel stiff last year. At first, she paid it no heed, but she soon felt the pain increasing. In February, she went to a hospital near her residence in Gangseo District.

She was diagnosed with “turtleneck syndrome,” an increasingly common malady among young people who remain in fixed positions for too long surfing the Internet or using smartphones. (It is also called forward head posture syndrome, when the spine goes into an anterior position.)

The smartphone is good for keeping connected and entertained - but it’s anything but good for your spine. Sitting in front of the computer for long hours takes its toll in neck and spine problems, and the use of smartphones is accelerating the damage.

Lee Man-sup, a 34-year-old office worker, is also a connected individual. He carries his smartphone everywhere, even when he goes to the bathroom. He uses it to organize his daily schedule, send and receive e-mails, and to upload messages to his Twitter and Facebook accounts.

“I think I use my smartphone at least three hours a day,” Lee said.

Since last fall, Lee has been suffering from neck and shoulder aches, so he visited an orthopedic office early this month. An X-ray showed that he had “straight neck syndrome,” or cervical kyphosis.

The doctor told him to reduce his use of his smartphone to less than two hours daily, and taught him some stretching exercises.

According to Teunteun Hospital, a clinic that specializes in neck and spine treatments, the number of patients suffering from neck pains that visited the hospital last year was 811 in their 40s, followed by 699 patients in their 20s.

“For most of the visitors in their 40s, neck pain is often related to aging and other degenerative physical changes,” said an official from the hospital. “But the number of young people in their 20s and 30s surged after the iPhone was first released in Korea in 2010.”

According to Cheon, both straight neck syndrome and turtleneck syndrome can develop into a serious disorder such as a ruptured cervical disk.

“To prevent straight neck and turtleneck syndromes, people should refrain from using their smartphones or computers for more than one hour straight and must take 10-minute breaks to ease shoulder and neck muscles,” said Kim Jae-hyung, professor at Eulji University Hospital.