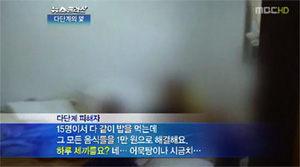 Two key suspects in a pyramid scheme totaling at least 4 trillion won ($3.4 billion), Korea’s largest fraud case, have been extradited to Korea after residing in China for the past three years.

According to Daegu prosecutors yesterday, the Chinese Ministry of Public Security, in cooperation with the Korea International Cooperation Agency, have transferred two suspects, the 55-year-old vice chairman of the company surnamed Choi and a 44-year-old manager surnamed Kang to Korea.

Prosecutors were ready with arrest warrants for the two suspects when they arrived at Incheon International Airport on Wednesday. They were immediately transferred to the western branch of the Daegu District Public Prosecutors’ Office. The two men were part of a pyramid scheme company run by its chairman Cho Hee-pal, 55, who is still at large.

In 2004, Cho established a company in Daegu. Over the years he opened over 10 branches of his company in other cities, including Seoul, Incheon and Ulsan under different names, luring in some 50,000 investors with the promise of high returns on their capital.

He ultimately scammed them of some 4 trillion won, the largest-scale pyramid marketing scheme in Korea to date, according to prosecutors.

Prosecutors were in the midst of investigating Cho and the other suspects when they escaped from the Taean coastline in South Chungcheong to China in December 2008 on a fishing boat.

One month prior to Cho’s escape from the country, the Daegu District Public Prosecutors’ Office and Daegu Metropolitan Police Agency were on his trail after receiving a tip about Cho’s fraud scheme.

In February last year, four accomplices, including Choi and Kang, were arrested in Yantai, Shandong, in western China. The Korean Supreme Prosecutors’ Office established a memorandum of understanding with the Chinese Ministry of Public Security for the transfer of these two suspects. An extradition treaty was established between the two countries in 2002.

Prosecutors said they will likely be able to gather a crucial lead as to Cho’s whereabouts because Choi and Kang had been in contact with Cho until their arrest.

Prosecutors further said that they will question Choi and Kang on allegations that Cho paid off the chief superintendent and other police officers in order to secure his escape back in 2008.

On top of fraud allegations, Cho would be charged with evading the law as well as concealing funds to escape the country, said prosecutors. They also said that it is likely Cho created bank accounts using the names of some twenty of his employees to distribute his slush fund and lived off of this money once in China.

“We will closely cooperate with Chinese prosecutors and the public security ministry and are working our hardest for the extradition of Cho, who is yet to be located, and the other suspects,” said a Daegu prosecutor.