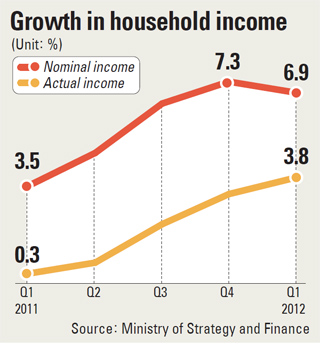 Korean households’ monthly income grew 6.9 percent on-year in the first quarter on the back of improved employment conditions, a government report showed yesterday.

According to Statistics Korea, monthly income averaged 4.12 million won ($3,540) in the January-March period, compared with 3.85 million won a year earlier.

Inflation-adjusted household income gained 3.8 percent on-year, an improvement from a 3.2 percent increase in the fourth quarter of 2011. Disposable income climbed 6.8 percent on-year in Q1 to a monthly average of 3.33 million won.

The gain in monthly income was attributed to overall improvements in the job market.

“Earned income, which makes up 65.3 percent of all household earnings, jumped 8.2 percent in the first three months, which helped boost the overall figure,” the statistical office said.

The top 20 percent of income-earning households posted an average monthly sum of 8.18 million won in the first quarter, while the bottom 20 percent netted 1.2 million won.

As the latter bracket spent 1.3 million won on average - just one-third of the wealthier group’s total expenditures - this means that one in five Korean households are consistently living beyond their means.

High income earners were also found to be spending more money in the first quarter relative to their incomes.

“Poorer households saw significant income growth, but consumption patterns did not rise in correlation with this,” said Kim Shin-ho, an official at the statistics office.

Labor market conditions improved steadily, with 467,000 jobs created in the three-month period. Regular workers accounted for 45.2 percent of the total workforce, up from 44.4 percent in the first quarter of last year.

“The improved job market has been a driving force behind income growth, while a slowdown in inflation has helped expand actual income,” said an official at the Ministry of Strategy and Finance.

Commenting on the “remarkable” growth in incomes among the bottom 20 percent, he said they also benefited from an average 13.1 percent rise in government support subsidies and other comparable income sources.

“The government will increase efforts to stabilize consumer prices for the working class. This includes improving the distribution structure for some frequently used products that are monopolized by market leaders,” he said.