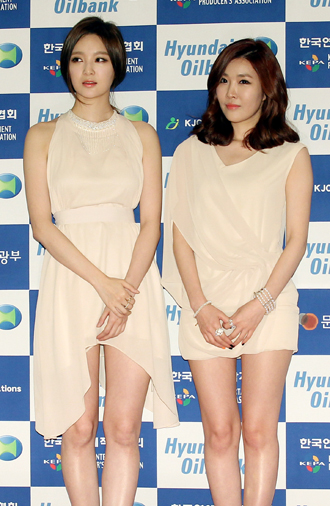 Female singing duo Davichi has shown its allegiance to friend and composer Jo Young-soo by agreeing to sing for his new album free of charge.

The girl group was featured in the single “A Night like This” on Jo’s digital album “All Star,” which was released online yesterday. The song also features newbie group 2Bic.

This isn’t the first time that Davichi has performed in the composer’s songs.

Back in 2008 and 2010, the duo also recorded songs for the composer, who strongly supported the group when it debuted in 2008.

When Davichi was starting out, Jo composed the song “Love and War” for the duo, and it later became a huge hit.

The girls were also set to perform in the United States earlier this year along with T-ara, which belongs to the same agency. But visa problems forced the cancellation of the event, called “K-pop Power & Beauty,” that was to be held at the Bill Graham Civic Auditorium in San Francisco.
By Carla Sunwoo