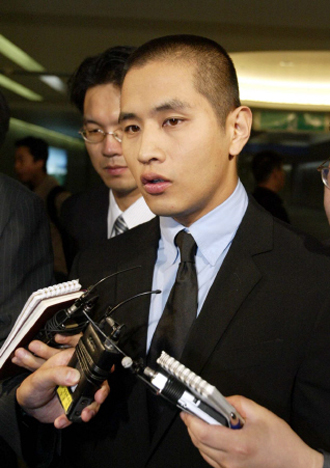 Yoo Seung-jun, a former idol singer now living in exile in the United States to avoid military service, has expressed his desire to return home and be forgiven by fans.

While at the Cannes Film Festival on Thursday to promote the movie “Chinese Zodiac” in which he makes an appearance, Yoo took the time to speak to Internet news Web site Dispatch.

“I miss my Korean fans so much. If an offer came up for me to take part in a Korean production, I’d do it in a heartbeat,” Yoo said.

He also greeted Korea media at a press conference by saying, “I miss Korea - all the time.”

Since leaving permanently for the United States in 2002, Yoo has tried to make a name for himself in the entertainment industry there. He met Jackie Chan in 2009 and signed up at his agency, JC Group, as an actor.

In Cannes, he was joined by Chan, who also appears in “Chinese Zodiac.” Fellow stars Kwon Sang-woo and Chinese actress Li Bing Bing were also present after flying directly from China.
By Carla Sunwoo