U-Kiss boys show off nerdy side

U-Kiss boys show off nerdy side 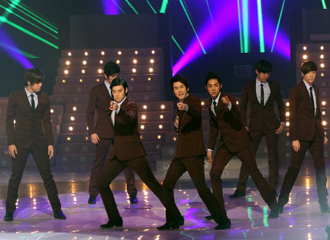 Despite their massive fame, the members of U-Kiss are still boys, all the way down to their obsession with video games. They landed in hot water on Monday for tweeting about how much they wanted the new video game Diablo 3, which was released on Tuesday. Netizens quickly grew irate over what they saw as the boys taking advantage of their fame to get expensive video games from fans.

“I’m in New York right now, but as soon as I get to Korea, I’m going to buy a new computer so I can play Diablo,” Soohyun said.

AJ also tweeted about the game, asking his followers, “I’ve given up trying to buy the game at a store. Have to buy it online. Does anyone know where and how?”

Later on, he uploaded pictures of himself and other members with the computer game and thanked an unidentified person for purchasing a copy for each member of U-Kiss.

The group’s agency insisted that the games were from a friend at Blizzard Entertainment, which produced Diablo 3.
By Carla Sunwoo