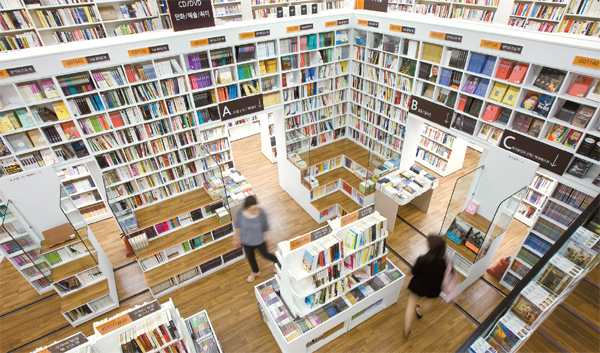 Once secondhand bookstores conjured up images of dusty and dimly-lit basements, but moderns stores like this one run by Aladin Communication in Sinchon, western Seoul, are different. Books are neatly classified and put on display in style. [JoongAng Ilbo]


Secondhand book shops were once a trademark of every neighborhood in the 1970s, ’80s and even ’90s. Students from those days can recount a common ritual they would perform at the start of each semester: purchasing workbooks for their new classes. If they were especially lucky, a workbook’s previous owner would have already completed the exercises.

But as people came to have thicker wallets and Internet shopping grew more prominent, secondhand book stores gradually disappeared over the last decade. Instead of offering bargains to cash-strapped students, they focused on a niche market of bookworms looking for rare or sold-out books.

But recent changes in spending and reading habits have injected new life into the secondhand book industry, and new modernized shops are attracting customers of all sorts, from grandmothers to college students regardless of age or gender.

Consumers say the biggest charm of secondhand books is still their price. They are, on average, 30 to 40 percent cheaper than new books.

Even though book buyers are more well off than in the past, they are choosing to spend their growing incomes on other commodities, leaving less available for hobbies like reading. The average Korean family with more than two members spent 20,570 won ($17.80) for books on a monthly basis last year, according to Statistics Korea. This is the lowest level since the survey started collecting such data in 2003. 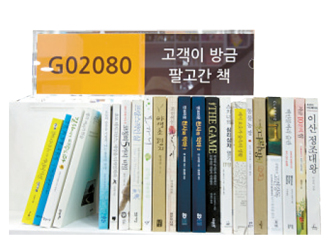 Between 2,000 and 3,000 books are traded per day at the Sinchon branch of Aladin. [JoongAng Ilbo]

At the same time, books are pouring into the market at rates never previously seen, even as consumers want to spend less on reading materials. As of last year, the country had 35,626 registered publishing companies that produced roughly 40,000 different genres of books, as they are measured by the Korea Publishing Yearbook.

The most popular items, too, are self-help books that are usually trendy for only a short period of time. So readers are finding fewer reasons to hold onto new books that they have purchased.

Taking into account these new trends, retailers have jumped back into the secondhand market, though the stores opening today are nothing like the quaint, dimly-lit and dusty hole-in the-wall shops of the past.

At the Jongno branch of the Aladin Secondhand Bookstore in central Seoul, books are neatly displayed in a huge and modern space. Anyone can find what they are looking for by using the numerous public computers connected to the store’s database. Of the company’s three secondhand bookstores, the Jongno branch offers the largest selection, with about 60,000 books. About 3,000 books are traded there every day.

Its owner, Aladin Communication, operates both brick-and-mortar locations and an online store. It began offering secondhand books online in 2008 to limited success, but business really picked up when the Jongno branch opened in April.

“Since the items for sale have all been possessed by someone else before purchase, many of our customers want to check the condition of the books before they buy. That’s what made us open offline, secondhand bookstores,” said Cho Sun-ah, an official who promotes the company. “After we opened the first offline store, we saw sales increase about 35 percent compared to roughly one year ago.”

The company has opened two more offline secondhand stores since the Jongno branch: one in Sinchon, western Seoul, and another in Bundang, Gyeonggi.

Aladin buys secondhand books from its customers using its own pricing standards. Prices vary depending on the book’s condition, year of publication and popularity.

The company is eager to promote its business for reasons other than price, however. It argues that its secondhand stores also contribute to the overall health of the publishing industry in this Korea.

“I believe we’re building up a virtuous cycle where people sell their books and purchase new books with the money. Secondhand books expand the reading population, after all,” said Seo Oh-hyun, a manager at the Jongno branch of the Aladin bookstore.

Not everyone is happy with the return of secondhand bookstores, though, worrying what competition from secondhand stores might do to the publishing companies, which have grown accustomed to charging higher prices for new books and channeling those funds into creating content.

The average book buyers doesn’t seem to be aware of such concerns. Outside of the Aladin stores, sales of used books are skyrocketing everywhere. The nation’s largest book retailers, Kyobo Bookstore, handles secondhand sales on its Web site. According to officials there, the company saw a 33 percent sales increase in that part of its business compared to one year ago. At the same time, visitors to its online secondhand bookstore jumped 18 percent.

The same trend is found at online book retailer Yes 24. Secondhand book sales there soared about 70 percent in the first quarter of this year from the same period a year ago.

“If customers give them a try, they can find out that secondhand books are no different from new books,” said Yun Mi-hwa, an official from Yes 24’s marketing team. “I think people these days have less prejudice against secondhand books as well.”