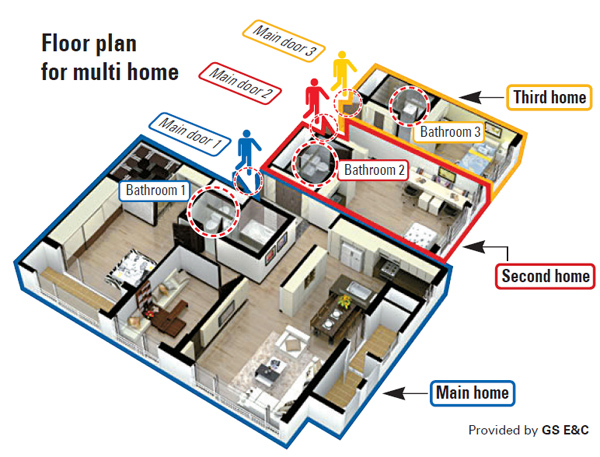 This allows several households to inhabit one apartment made up of numerous rooms by equipping them with multiple front doors.

One household owns or leases the entire unit and rents or sub-lets the other rooms. The rooms must be at least 14 square meters, have a separate doorway directly leading outside and have their own bathroom attached.

This system was already in place for apartments larger than 85 square meters, but the new rule extends its compass to include smaller plots.

The change came as single households now account for about 50 percent of residences in the country, according to Statistics Korea.

“This gives homeowners the option of renting out the rooms they don’t use to earn rent money,” said Kwon Hyuk-jin, director of the housing construction and supply division at the Ministry of Land, Transport and Maritime Affairs.

Multi homes claim to offer more benefits than other single-room residences, such as tighter security and more convenient facilities such as parks, better parking options and stepped-up communal maintenance systems.

While prices differ by district, the multi homes costs about 100,000 won ($85) more in monthly rent than a similarly sized officetel, Kwon said.

“We expect that college students who are looking for places to live near their school will welcome the news, as will young married couples who want to live with their parents but also want a degree of privacy,” he added.

GS Construction is considering building multi-home apartments in the Sinchon area of Seodaemun district in northwestern Seoul, located near four major universities and clusters of bars and restaurants.

“Such residences will be useful in some areas but not others,” said Kim Se-joong, a manager of GS Constructions’ housing design team. “We haven’t built any of them yet, but we’ve designed floor plans.”

Meanwhile, the government said home owners are prohibited from converting their apartments to ride the coattails of the new trend unless the whole building is set to be renovated.

“Renovating just one apartment unit can undermine the safety of the whole building,” said Kwon of the land ministry.

It remains to be seen whether multi homes will be welcomed by the public, however, as they have not received a particularly warm welcome in larger apartments, where they have been available since the late 1990s.

At that time, lukewarm demand for big multi homes in Namyangju in Gyeonggi, and in Huikyeong-dong in Seoul’s Dongdaemun District, poured cold water on the new development idea. Even last summer, a project for such homes in Yongin, Gyeonggi, called Seohae the Blue only managed to sell half of its properties.

“People who can buy a big multi-home apartment don’t tend to need to rent out rooms to generate income,” said Kwon.