Bus with kids plunges over a precipice

Bus with kids plunges over a precipice 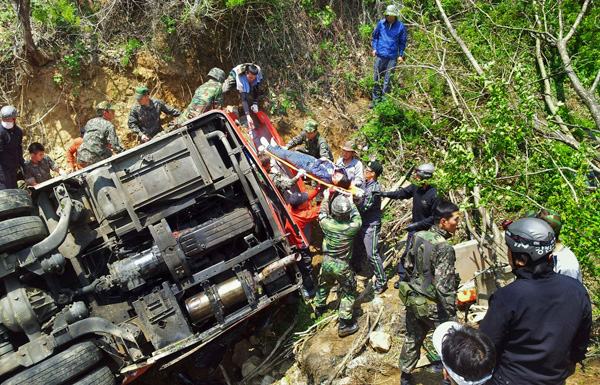 
YANGGU, Gangwon - A tour bus filled with eighth graders enjoying a school excursion plunged over a precipice in Gangwon, injuring all 38 students, two teachers and the driver.

Brake failure is suspected as the cause.

The Yanggu Police Precinct in Gangwon said yesterday that the bus plummeted 13-meters (42.6 feet) down a precipice from a downhill curve near Eulji Observatory in Yanggu County, Gangwon at 11:47 a.m. The students were from Woosong Middle School in Daejeon and the driver was a 44-year-old identified as Cho.

Six students were severely injured, including a 14-year-old boy surnamed Lim, who is in critical condition. The remaining 32 students, two teachers and the driver were slightly injured.

About 60 soldiers of 12th Division of Korean Army, police officers, and a 119 rescue team were dispatched to the scene. The injured were sent to Chuncheon Sacred Heart Hospital and Inae Hospital in Gangwon. The student in critical condition was taken by helicopter to a larger hospital later.

Police said the injuries would have been much worse if the passengers weren’t wearing seat belts.

“Seconds before the accident occurred, our teacher told us to buckle up quickly because the bus had developed a problem,” a student said. Three to four seconds after they buckled up, the bus plunged over the cliff.

The police assume the bus could not slow down on the downhill road because its brake system suddenly failed.

The police said the 150 Woosong middle school students were on a school trip, in four separate buses, in Gangwon for three days from Wednesday. They were heading to the Park Soo Keun Museum in Yanggu County after touring the Eulji Observatory, which was the final stop.
By Kwon Sang-soo [sakwon80@joongang.co.kr]