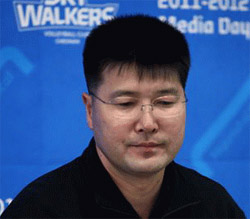 Prosecutors indicted a former volleyball star for taking money from a father to help his son.

The Seoul Central District Prosecutors’ Office said yesterday that it has indicted without detention Ha Jong-hwa, 43, a former ace player for the Korea men’s national volleyball team and the current manager of Cheonan Hyundai Capital Skywalkers, on suspicion of receiving bribes from a parent of a high school player in return for helping the player get accepted to one of the country’s top university volleyball teams. Prosecutors indicted Ha after securing testimony from the player’s father surnamed Uhm.

“The father has testified that he gave 20 million won ($17,620) in cash to Ha when he was the manager of the son’s high school volleyball team in 2009,” a spokesman for the prosecution told the JoongAng Ilbo.

“I gave the money to manager Ha because I thought it was necessary to get my son accepted to any university, as my son was not good enough to attract attention from scouts,” Uhm told the prosecutors during questioning.

“About two weeks later, Ha told me that my boy was accepted to one of the universities in Seoul that has a strong volleyball team.”

The prosecutors confirmed that the son actually joined the university and its volleyball team in 2010, but quit in less than a year due to lack of talent.

The prosecutors will probe Ha to find out whether he actually received the money from Uhm, and also investigate whether he received more funds from other parents.

“I can’t answer any questions because I’m under investigation, but I can clearly say that I never gave the money to officials at the university,” Ha said during a phone interview conducted with the JoongAng Ilbo.

Ha was one of the most successful and popular volleyball stars of the 1990s.
By Park Jin-seok [sakwon80@joongang.co.kr]