Win in Jeju puts Kim Bio at No. 1 in prize money

Win in Jeju puts Kim Bio at No. 1 in prize money 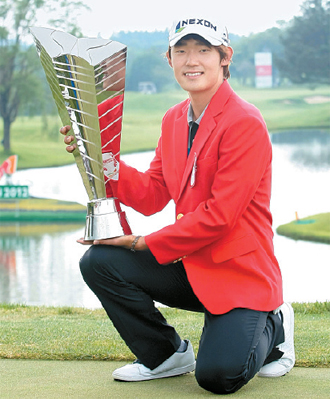 Kim Bio holds a trophy after winning the SK Telecom Open in Jeju yesterday. With this victory, Kim has became only the second golfer in KPGA history to win two golf events two weeks in a row. [NEWSIS]

Golfer Kim Bio succeeded in achieving two consecutive victories in the Korean Tour after winning the SK Telecom Open yesterday, becoming the No. 1 prize money earner in both the KPGA and One Asia Tour.

At the Pinx Golf Club in Jeju, Kim shot a bogey-free 5-under 67 in the final round to finish the golf tournament, which is co-sanctioned by the KPGA and One Asia Tour. His total score of 18-under 270 earned the winner’s prize of 200 million won ($171,200).

The 22-year-old also won the GS Caltex-Maekyung Open, another co-sanctioned golf event, on May 13.

With these victories, Kim has bagged a total of 400 million won and has two wins in both the KPGA and One Asia Tour, taking top place in terms of wins in both categories.

Kim is also now only the second golfer in KPGA history to win golf events two weeks in a row. Kim Kyung-tae was the first to do so at the Tomato Saving Bank Open and the GS Caltex-Maekyung Open in 2007.

At the SK Telecom event, Kim, who was the leader from opening day, was expected to earn an easy victory, but the final round turned out be tougher than expected.

The Yonsei University student entered the final round with a two stroke lead, but Park Sang-hyun, who collected his first Korean Tour win at the 2009 SK Telecom Open, was on fire from the start and, at one point, took the lead from Kim.

Park collected birdies in first three holes and even made a 15-meter (49-foot) eagle putt on the par-5 fourth hole to take a two stroke lead.

However, Kim and Park both entered the lead when Park made a bogey on 11th hole and Kim shot a birdie on the 14th. It was at this turning point that Kim began to shine again.

At the par-5 16th, Kim saw his second shot land on the rough but successfully escaped with third shot to put the ball about one meter from the pin. He eventually collected a birdie to regain his exclusive lead at the event. He also put tee shot in the bunker on the next hole, but wrapped up with par.

Park, on the other hand, collected two consecutive bogeys in last two holes and finished at 15-under 273.

“I feel so happy as it looks my hard work has paid off,” Kim said. “I heard how Park was performing, but I tried to focus on my own play, and that led to a good result.”

Kim, who lost his PGA Tour card last year due to poor performance, said that he wants to take his streak of good performances to the U.S., where he hopes to finish inside the top 25 at the nationwide tour so that he can re-enter the PGA Tour.

Joo Heung-chol and 17-year-old amateur Kim Si-woo tied for third at 13-under at the event, while Hur In-hoi, who shot nine-under-par 63 on Saturday to set a course record, finished fifth at 12-under.

Choi Kyung-ju, better known as KJ Choi in the PGA Tour, finished at 13th with a score of four-under-par 284. The golfer has won the SK Telecom event three times and is currently the highest ranking golfer in Asia at No. 29. The eight-time PGA winner was playing at a local golf event for the first time in seven months and couldn’t overcome some putting problems.