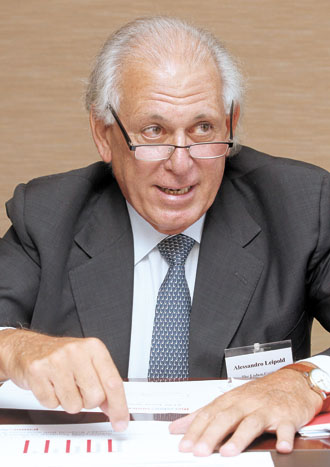 With the Kospi plunging below 1,800 due to the fear of Greece exiting the European Union, the whole world is wondering about the fate of the euro zone.

Alessandro Leipold, a former IMF official and current chief economist at the Lisbon Council, a think tank for European financial issues, says Greece’s exit from the European Union will only prove that the euro is “composite currency that is breakable.”

Leipold sat down with the Korea JoongAng Daily Friday at a hotel in central Seoul. He said that European Union’s crisis stems from the fact that the union has yet to become “coherent and cohesive.”

He was in Seoul to attend a forum entitled “Asia in the New Global Financial Scene” hosted by the Institute for Global Economics last week. The following are excerpts from the interview.

Q. Is Greece’s financial crisis the overture to the euro’s fall?

Were these problems destined from the birth of the euro?

It makes a big difference if people start to see a currency as something they can change over time. The Greek exit would bring that aspect right up to the front. [If] there are periodically some other countries with problems or difficulties, the questions will rise again if they are going to leave as well.

Then, do you think that European Union might break?

It is conventional wisdom that the European Union is unfinished business and that it needs more to be successful.

It is very difficult to be built unless you have a really true market union. It has to be a more coherent and cohesive union of countries that are intrinsically more similar.

Do you think Greece will eventually exit the EU?

If nothing changes from the present situation, an exit seems to be inevitable. I don’t know the full answer to the question, but I don’t see how an exit can be avoided, and certainly an exit seems much more likely than 10 days ago.

Exiting from the euro zone will be a disaster for Greece. The vast majority of Greeks do not want it. If I were advising Greece’s government, the first best option is to try to stay in. Then I should be advising [other] Europeans be more flexible.

Some speculate that as long as Greece makes a decision whether to stay in the European Union or not, the market will be a bit more stable than it currently is. What’s your take on this?

Markets hate uncertainty. If that eliminates an element of uncertainty, perhaps, yes. But any decision to exit is going to leave the market in a state of uncertainty for quite some time.

I don’t think it’s going to be, “Okay, Greece is gone, that’s fine, let’s move on.” They would want to see what’s going to happen next.

I think we are in for a bumpy ride in a volatile market for a long time throughout the world including Asia because we are all so closely linked now.

What can Korea do to minimize its risk due to Greece’s financial crisis?

Everybody always says to do what you can do to stimulate your domestic market. You have to look for other export markets, stimulate your own economy and loosen your own policies a little bit. That’s the basic formula.