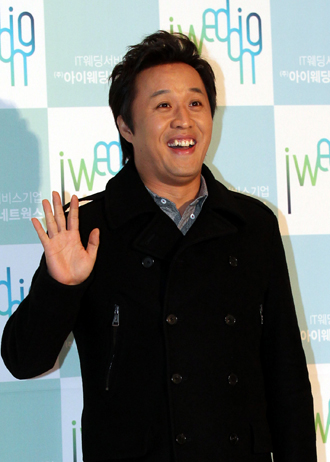 Comedian Jung Jun-ha tied the knot with his long-time girlfriend at the Silla Hotel in central Seoul yesterday.

“The day that I never thought would come has finally arrived,” Jung wrote on Twitter late Saturday night. “It’s a very strange feeling, and I’m thrilled.”

“I know I can’t answer all of your questions, but this old bachelor will make good family,” he added.

The 41-year-old told media earlier this month that he would marry his girlfriend, who is 10 years his junior. The two have been dating for four years, and Jung’s fiancee is reported to be a Korean-Japanese flight attendant.

Actor Lee Soon-jae, who appeared in the sitcom “High Kick” along with Jung, was the wedding officiant.

Jung and his new wife have not revealed the location of their honeymoon.