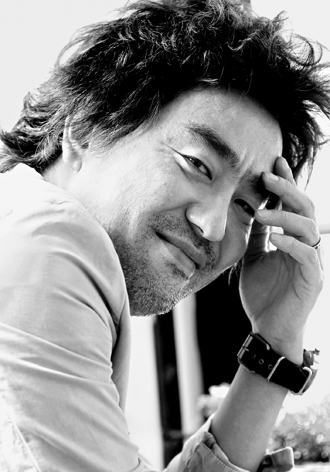 Judging solely by his appearance, Ryu Seung-ryong would appear to be an archetypical masculine actor. Some of his fans even hesitate to approach him for autographs because he can be so intimidating.

He’s played up this image in a number of movies including “The Front Line” as an officer of the North Korea’s People’s Army and in “War of the Arrows” as a general of the Ching Dynasty.

Most recently, he plays a ladies’ man in “All About My Wife,” released on Friday, who attempts to seduce a woman at the request of her unhappily married husband looking for a divorce.

But in his personal life, he has a rather unexpected hobby: gardening. The actor often spends time planting flowers at his home garden in a suburban area of Seoul.

When filming “War of the Arrows,” the crew found it amusing when Ryu took photographs of small flowers on street while he wore a suit of armor.

And though the actor has been quite successful in playing his tough guy roles, he has also worked to dispel stereotypes in some of his other works, perhaps because he does the same at home when off the set.

In “Quiz King,” he plays a gambling husband who fears his wife, and in the drama “Personal Taste” his character is a quite masculine gay man. “War of the Arrows” has him playing a hard-nosed general who actually cares for the well-being of his subordinates.

The JoongAng Ilbo sat down with Ryu recently to get a sense of what this man of contradictions is really like.

Q. Did you draw inspiration from any particular character for your role in “All About My Wife”?

A. No, I wanted to avoid the obvious “Casanova” character and create one of my own. My character is somewhat cliched but also naughty, a little different from the stereotypical ladies’ man. He is also more humane and sensitive than the stereotype typically allows.

How else did you prepare for the role?

I first read the book “The Art of Seduction.” I also studied the so-called pickup artists’ material. Although there were some cheesy lines, I acted with sincerity, even when I had to milk a cow as naturally as possible in front of Jung-in [the female character].

What did you learn about seduction from the materials?

You have to listen to a woman’s emotions and lead her along. To be successful, you have to listen carefully and tell her she is beautiful. Self-control and patience are also important elements.

As a man, I was ready to punch your character by the end of the movie. What do you think about that?

That means I have successfully fulfilled my responsibility as an actor. My actor was created to open people’s eyes to the importance of communication in marriage.

How did you feel about playing this kind of character?

I have played naughty characters in several movies such as “7th Grade Civil Servant,” “Quiz King” and “The Recipe.” I only needed to show more of what I have inside of me. In “War of the Arrows” and “The Front Line,” I always had to show angry eyes, but this time, puppy eyes were more appropriate.

What do you mean when you say you do not like “typical characters”?

What is acting to you?

When I act in a movie, I’m always learning something new. For “War of the Arrows,” I studied horseback riding. For “All About My Wife,” I learned dancing, foreign languages, cooking, sand art and even how to milk a cow. But then again, once a movie ends, I quickly return to normal life. Acting is a job with a lot of contrasts where in one moment I must learn something new but in the other quickly lose a habit and replace it with something new.