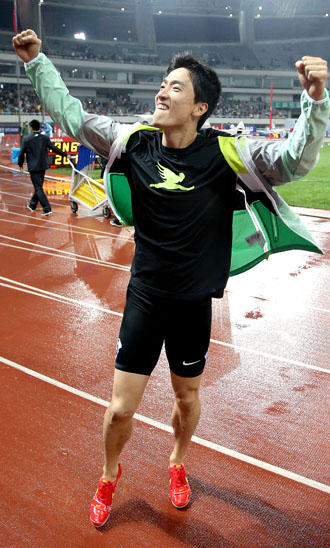 Liu Xiang celebrates after the 110-meter hurdles event at the 2012 Diamond League competition in Shanghai on Saturday. [XINHUA/YONHAP]

SHANGHAI - Chinese athletics superstar Liu Xiang is playing down expectations for his performance at the London Olympics despite setting a season’s best time in the 110-meter hurdles on Saturday.

Liu became China’s first-ever Olympic track champion at Athens 2004 but four years later caused national angst when he dramatically pulled out injured in front of a jam-packed Bird’s Nest Stadium at Beijing 2008. On his home turf in Shanghai at the Diamond League meeting on Saturday, he clocked 12.97 seconds in wet conditions to beat two Americans, David Oliver and world outdoor champion Jason Richardson.

“I didn’t think I would run within 13 seconds, so seeing 12.97 seconds makes me extremely happy,” he said after his victory.

Speaking to reporters, he sounded a note of modesty, saying it would be an honor merely to be in the Olympics - although he also said he was practicing his English.

While China has yet to pick its three hurdlers, Liu is considered an automatic choice.

“I don’t think about breaking the world record,” he said. “I hope to keep this good form and give full play to my training. My dream is just to stand on the Olympic track.”

Fellow competitor Richardson said Liu seemed to draw strength from the home crowd, who roared as one when the Chinese hurdler crossed the finish line.

“He’s incredibly hard to beat here,” Richardson said. “What was surprising was to see an entire country get behind one athlete. I wish we had a little bit more of that in America.”

But Liu also has to contend with the weight of expectations riding on his shoulders from the world’s most populous country.

Asked if he faced pressure, Liu said, “I’m used to pressure. I’ve never felt pressure on myself. Everyone faces pressure, what you have to do is control it.”

Liu declined to answer questions about his specific goals for the Olympics or how he might handle Dayron Robles, the reigning Olympic champion.

Robles obstructed Liu at the World Championships final last year, causing the Cuban to be disqualified after the two clashed arms.