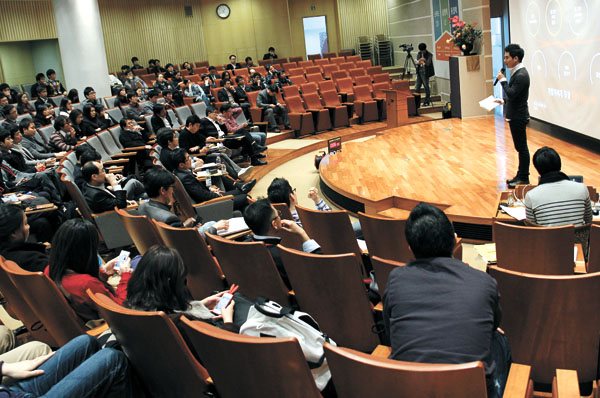 During an audition at SK Planet headquarters, ideas for in-house startups are heard. The ideas are put to a vote by employees who watch the audition on a live feed on the Internet. Provided by the company


Early last month the first in-house startup at SK Planet officially set sail. The startup Stop AD is developing a smartphone app that after tracking a persons location, pops up advertisements from nearby businesses on the person’s smartphone screen as they start a map or location app.

The 30 year-old Lee Jae-ho, who has worked at SK Planet for four years, came up with the idea and recently got promoted as team leader in his department.

After a trial test of the app in February this year, which received a huge response from the general audience, the project decided to go into full in-house startup mode. Under Lee, there are four SK Planet employees working on the project. The project was encouraged by the company after getting a strong review through an in-house audition.

Companies’ in-house ventures are once again in the spotlight as companies try to encourage an entrepreneurial spirit in their employees so they will think up new business ideas.

The movement is aimed at finding new business strategies and ideas to overcome the struggling global economy.

Companies claim that in-house startups will likely boost morale within the company thanks to higher energy among those who come up with innovative ideas and therefore have a positive influence on other departments.

And even if the in-house startups take off and become a business of their own, they will still maintain a close relationship with the parent company.

In-house startups first appeared in the mid-1990s, when the Korean economy began riding the wave of the expanding IT industry. They have consistently been thought of as an innovative approach to stimulating business and encouraged by many leading Korean conglomerates.

Experts say in-house startups are much safer than starting a business on one’s own since companies shoulder the initial cost and therefore reduce the risks that the startup entrepreneur may face if the business tanks.

“In-house startups need to be encouraged when the economy is stagnant, as the person who is starting a new business can be more bold,” said Bae Jong-tae, business management professor at Kaist.

The automaker said that productivity and price competitiveness have improved significantly by working with companies that were previously in-house startups.

PLK Technology, which spun off from Hyundai Motor in July 2003, is one such company. PLK Technology developed the system that warns the driver when a vehicle is drifting out of its lane.

The technology is now installed in several Hyundai Motor and its affiliate Kia Motors’ vehicles, including the high-end Equus, Genesis, Grandeur, SUV Santa Fe and K9.

Hyundai SeasAll is another in-house startup project that spun off from the automaker. The company, founded in September 2009, specializes in ship engines. The engines are remodeled Hyundai and Kia automotive diesel engines.

SK Group has also encouraged its employees to expand their entrepreneurship. The idea was first pitched by its Chairman Chey Tae-won in 1999. SK Encar, an online used-car dealership that officially went independent, is considered a successful launch of a business startup that originated from the group’s startup venture project.

At the time, SK Encar was obsessed with the widely expanding Internet.

Current president Park Sung-chul, 50, who was back then a low-level employee, said in the late 1990s the Internet was a huge issue and he wanted to start a business utilizing it. Of all his ideas, he finally settled on starting an online used car dealership. SK Encar launched in December 1999.

Today, SK Encar is not only a used-car dealership both online and offline in Korea, but it also has businesses in the Middle East, Russia and Southeast Asia.

Since September 2009, SK Group has been encouraging employees themselves to jump into discovering new growth engines.

The employees are not just encouraged to propose new business ideas but also lead a team and actually spearhead a business idea with the company’s full support, including manpower and needed resources.

In the case of Posco, the nation’s biggest steelmaker, 11 independent companies have launched between 2001 and 2005 through such in-house startup projects.

Most of the companies that have spun off from Posco focus on providing consulting on how to set up industrial facilities such as plants.

But not all in-house startups are successes.

An in-house startup from Daewoo Shipbuilding and Marine Engineering suffered a huge setback.

A funeral service startup, incubated from the shipbuilder, launched in February 2009 with a capital of 1 billion won ($852,659).

However, high ranking officials of the funeral services were arrested for illegal activities, including bribery. The labor union of the shipbuilder questioned the need for a funeral service company and the startup was dissolved before it spread its wings.

Some say for in-house startups to blossom, the first thing they need is strong support from the company where the employees are currently working.

“The encouragement of starting a business within a company has diminished in recent years as the economy is in a difficult situation,” said Park of SK Encar.

“When I started an in-house venture in the early 2000s, the atmosphere within the company was such that it wouldn’t make a huge difference if the startup business didn’t fare too well,” Park recalled. “For an in-house business to launch, the company needs to be tolerant and leave them to do whatever they do, not placing the in-house startup within the frame of the existing company.”