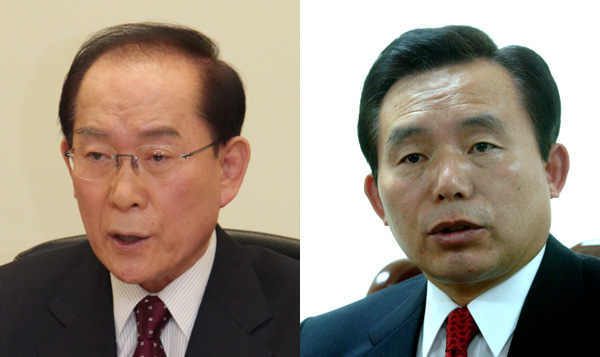 
Lee Hoi-chang, co-founder and former chairman of the opposition Liberty Forward Party, said yesterday he will defect from the party, raising speculation on the next move of the influential conservative.

“I appreciate party members who have shared difficulties and sufferings since we founded the party together and believed in me,” Lee said in a statement issued yesterday.

“But we were shocked by the miserable result in the April 11 legislative election. I couldn’t bear feeling ashamed having disappointed party members.”

The LFP, which won 14 seats in the general election in 2008, clinched only five seats in the April race. In an effort to revamp the party, emergency leadership is now planning to change the party’s name and make other reforms.

Representative Park Sun-young, a close confidant of Lee in the party, said that Lee wasn’t satisfied with interim leader Rhee In-je’s plans to revamp the party, especially those aimed at changing the party’s ideology.

“Lee has been unsatisfied with the emergency committee’s recent moves to change the party’s name, polices and even ideology, from conservative to moderate, because he was one of those who founded the party,” Park said. “And he thinks he can’t stand the changes anymore.”

Representative Rhee has pushed forward reforms after the party’s poor showing in April, even those focused on the party’s ideology.

Lee, who lost to rival Kim Dae-jung in a neck-and-neck presidential race in 1996, is known as a staunch conservative.

Lee also implied his discontent with those reforms in the statement yesterday.

“We have developed the party with dignity and belief that we strive for common values and the identity of Korea,” Lee said. “So I determined to leave the party while it is still called the LFP.”

While some say Lee will retire from politics all together, others speculate he may join conservatives in the ruling Saenuri Party and run in December’s presidential race.

Lee has repeatedly said he would declare his intentions regarding the presidential race after the LFP’s primary at the end of May.

“Now he has become free from a political party and he would be able to actively work for the creation of a conservative administration,” an aide of Lee’s told the JoongAng Ilbo yesterday.