QR code ads will give chances to win cash

QR code ads will give chances to win cash 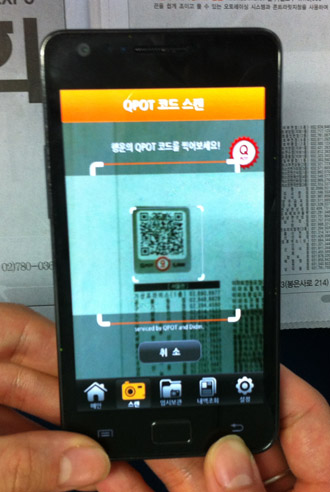 Two-dimensional matrix barcodes are the rising stars in digital marketing today, and can be found anywhere from newspapers to street-side advertisements.

QR, or quick response codes are bar codes that act as links to Web pages so that mobile phones can be directed to online sites without the need to enter a URL simply by scanning the bar code.

They can be used for scanning and storing information via in-store displays, magazines, and television screens, or in Korea, via subway station ad for virtual grocery shopping.

The JoongAng Ilbo is the first Korean newspaper to jump on the bandwagon by featuring QR code advertisements on its pages.

Since March 16, JoongAng Ilbo readers have been able to find QR codes that can be scanned using the Qpot application, which is available for both iPhone and Android devices.

Watching a featured advertisement on a smartphone enters a reader into a weekly prize lottery.

Through an exclusive contract with Qpot, the use of the QR code advertisements will be expanded from today to include all publications under the control of the JoongAng Media Network, including the Korea JoongAng Daily, the JoongAng Sunday and Ilgan Sports. The broadcasting network JTBC will also be included.

Using their smartphone cameras, readers can find and scan the QR codes with the Qpot application. Those who do so will receive a six-digit lottery number and then must watch an advertisement to be officially entered into a weekly lottery.

Users can check Qpot’s Web site at www.qpot.net to see if their numbers have been selected every Saturday.