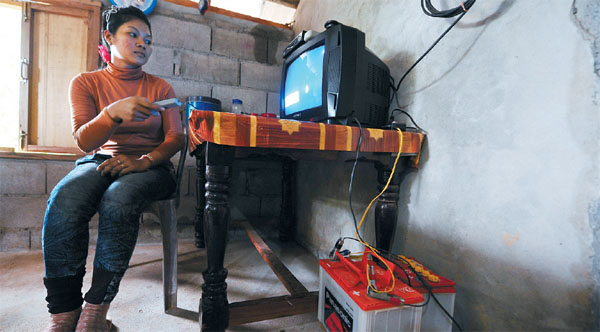 Sok Kunthy, a homemaker in Ta Ken Koh Sla, shows off how she enjoys the electricity generated by a solar power plant that Korea built for her village. [NEWSIS]


Ta Ken Koh Sla, CAMBODIA - After finishing her daily chores on a recent morning, Sok Kunthy, a 24-year-old homemaker, sat in her living room flicking through television channels with a remote control.

The experience was a thrilling novelty for Sok. Until a few weeks ago, her village didn’t have enough electricity to enjoy such a mundane pleasure.

This small village of around 320 households in Kampot Province, 110 kilometers (68 miles) southwest of the Cambodian capital of Phnom Penh, was built in 2008 by the Cambodian government for retired soldiers and their families. But it didn’t come with electricity, making daily duties onerous and entertainment impossible.

All of that changed thanks to solar power panels Korea brought to the village over the past one and a half years. 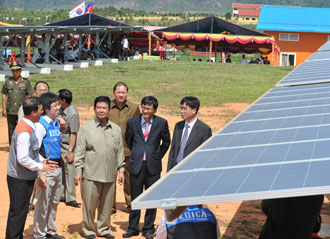 Kim Han-soo, Korea’s Ambassador to Cambodia, and Suy Sem, minister of the Ministry of Industry, Mines and Energy, and around 30 other Cambodian officials inspect a solar power plant built in Ta Ken Koh Sla, a small village in Kampot Province, Thursday. Around 550 villagers attended the completion ceremony. [NEWSIS]

“With this electricity, I can watch television and turn on an electric fan anytime I want,” Sok said. “I am grateful for this, a better life.”

Her appreciation was shared by other residents of the village, who came out Thursday morning to attend a ceremony that marked the completion of the solar power plant project by the Korea International Cooperation Agency.

Around 30 officials of the Cambodian government drove two hours from Phnom Penh, including Suy Sem, the minister of industry, mines and energy, to join around 550 villagers for the 90-minute ceremony.

“This is a huge project for Cambodia,” the minister told reporters through an interpreter. “People living here are soldiers who did their service for our country, so this project has special significance for us.”

The $2.2 million solar power plant project, part of the Korean government’s enhanced international aid, is the biggest of its kind in Cambodia by a foreign country, according to officials of both governments.

It was designed as an “international initiative” to provide aid in an environmentally sustainable way, which is part of Seoul’s attempt to be a green growth leader.

Launched in November 2010, the project built solar power stations powered by dozens of solar panels in two villages for retired Cambodian soldiers: A 60-kilowatt plant in Ta Ken Koh Sla and a 30-kilowatt plant in Phnom Kulen, a village in Siem Reap Province.

The project went into a pilot operation in both villages a few weeks ago. Koica officials distributed rechargeable batteries to the villagers. The batteries give enough power for a home for seven to 10 days. Once used up, the battery is brought back to the plant for recharging, which costs only 25 cents, one eighth the average cost of getting the same amount of electricity from a diesel-powered plant.

The project in Phnom Kulen, with its 250 households, also marked its completion on Thursday.

The villages have been transformed with their new sources of electricity. Yoon Chun-geun, a deputy representative of the Koica Cambodia Office, said Ta Ken Koh Sla village used to be completely dark after the sun went down.

“Students here had no lights to study under when they came home, but now they can study into the night,” Yoon said.

The average electricity supply rate in Cambodia is about 30 percent, and the government’s plan is for all villages to have access to some form of electricity, including off-the-grid, by 2020.

“Koica’s help for this solar power energy project is shortening the time to provide electricity to this village under our electricity energy policy,” said the Cambodian energy minister, Sem.

Kim Han-soo, Korea’s ambassador to Cambodia, hopes that the solar power project would be able to provide a “substantial, environment-friendly alternative” to achieve the country’s goals.

“Providing electricity in a way that does not use fossil fuel, I think, will serve as a small but significant step in tackling global climate change,” Kim said.

The project is part of the East Asia Climate Partnership, which President Lee Myung-bak suggested at the Group of Eight summit in July 2008. For the five years beginning 2008, the Korean government has carried out EACP programs that will be worth $200 million, focusing on water management and low-carbon energy.

More than 31 projects have been started in 13 countries since 2008, including 20 projects in 10 countries by Koica.

For the solar power project in Ta Ken Koh Sla, BJ Power, a Korean contractor, was commissioned by Koica to build the solar power plant in the villages, and it will manage the plants for three years. Then Cambodians, trained by Koreans, will take over management. Five Cambodians received free training at the Korean headquarters of Koica, and five others were trained locally.

Korea signed an MOU for the aid for Cambodia in 2001, sending five Koica workers in 2003. Currently, more than 100 Koica members are working for the development of Cambodia. Fifteen aid projects are underway ,and Cambodia is one of the seven largest recipients of international aid from Korea. Korea’s aid is also the sixth-largest Cambodia gets from other countries.

Cambodian officials say Korea’s transformation from an aid recipient into an aid donor over a short period of time is an inspiration for Cambodia, which shares a similarly painful history, including colonization by France and Vietnam and the brutal rule of the Khmer Rouge.

Korea is also known for giving politically neutral aid. Some Western countries’ aid focuses on advancing institutions and democratization in Cambodia, which can create political tension with China, another heavy aid donor to Cambodia.

Myanmar, a much bigger neighbor which also has to walk a tightrope between China and the West, is seen to be tilting toward Western countries. Cambodia hopes that may result in an increase in aid from China toward Cambodia, said a Cambodian source on condition of anonymity.

Korea is resolute to be a consistent aid donor to Cambodia despite the country’s friendly relations with North Korea, the ambassador said.

“Cambodia has been friendly with North Korea historically and it is not a country that will just turn to our side because of our aid, so we are focused on helping as a friend, neighbor and a country that went through a painful experience as an aid recipient,” Ambassador Kim said.

Cambodia and other Asian countries account for 51.2 percent of all of Koica’s budget for this year, according to the Koica officials. Countries in Latin America, the Middle East, Central Asia and Africa are also helped by Koica programs.

Koica, founded in 1991, is a leading disseminator of Korea’s official development assistance. Its budget surged to $454 million in 2010 after Korea joined the OECD’s Development Assistance Committee. It accounted for nearly half of Korea’s bilateral ODA budget and 78 percent of its grand aid.