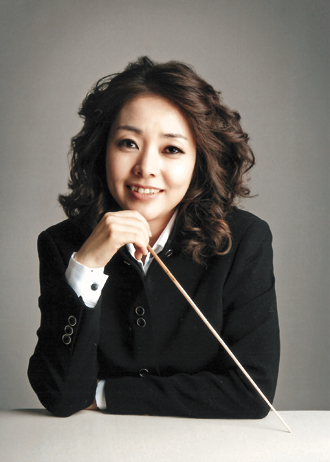 Kim Bong-mee, conductor for the Seoul Philharmonic Orchestra, raises the baton in “The Tales of Hoffmann,” presented by the Nuova Opera Company over the weekend at the Seoul Arts Center. Provided by the Korea Opera Festival

Classical music is no stranger to sexism. The conductor’s platform has long been dominated by men, and some of the top figures in the field have questioned a woman’s ability to lead a classical performance.

“Women can’t conduct Brahms, and Mahler is men’s music,” Helen Thompson infamously quipped some 30 years ago while he was manager of the New York Philharmonic.

More recently, a study conducted by the University of Southern California and Ohio State University showed that gender bias influences how people rate a conductor’s performance.

But Kim Bong-mee, a 37-year-old maestro, gallantly raised her baton and made a name for herself in a man’s world. She returned to Korea in 2008 from Germany, where she graduated from the University of Music Detmold.

In 2003, Kim became the first Asian woman to conduct Helmuth Rilling’s Bach Orchestra. She is now a full-time conductor at the Seoul Philharmonic Orchestra and recently performed with the Nuova Opera Company to present “The Tales of Hoffmann” over the weekend.

The show was part of the Korea Opera Festival, which kicked off on May 6 at the Opera House of the Seoul Arts Center.

To Kim, conducting an orchestra for an opera is a “thrilling experience.” She said her long-term goal is to create an orchestra in Korea that is dedicated to only performing opera.

The Korea JoongAng Daily sat down with Kim last week before her orchestra got into the full swing of preparations for the opera. The following are excerpts from the interview. 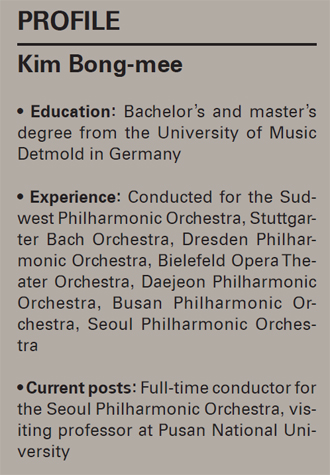 Q. Your parents are both musicians and you also began studying music professionally with a major in piano. What made you decide to change your career to conducting?

A. Both my parents are musicians, so it was only natural for me to learn music. I started playing the piano when I was 5. As I began playing the piano at an early age, people around me, even my parents, just assumed that I would become a pianist, but I had something else in mind. And that was conducting.

But I couldn’t really say that out loud. I always thought that conducting was for men and never imagined a woman could do it. My father was a conductor for the Busan Philharmonic Orchestra and I always saw him conducting, but I never thought that I would become a conductor.

But when I went to university in Germany to study piano, I naturally began getting more interested in conducting. I always thought the piano was such a lonely instrument. Of course, the world of conducting is so broad that it requires the person to be alone and study so much as well, but it’s a different feeling of loneliness.

A conductor must be able to breathe together with the players and move people’s minds to play the notes on the scores. So a conductor must have the skills to handle people and it requires leadership. Such characteristics for a conductor was very appealing to me as I am that kind of person. It suits my personality.


As you said, there are not many female conductors, especially in classical orchestras, not just on Korean podiums but also internationally. A recent study also revealed that people have a stereotypical notion that conducting is for men. Wasn’t it difficult to debut as a conductor in Germany as an Asian woman?

Of course, there was attention I received as a young Asian conductor in Europe. But I believe it was both good and bad because people thought it was novel for such a person to conduct an orchestra full of European musicians who were mostly older than her, but at the same time, seeing me on a podium allowed them to concentrate more on the music to see what it was like.

I don’t think it really matters whether you are a male or a female, tall or short, Asian or Western. What matters is how the audience feels after your performance. The audience could also have a prejudice because of your gender or ethnicity but such an appearance only lasts for the first three minutes or so while you are walking onto the podium.

I have confidence that whatever the audience thinks me of, I can remove such prejudice by moving their hearts.

You said that the genre you hope to focus on is opera. Why?

I’ve always loved stories. Musical instruments don’t have stories or lyrics. But when I first went to Germany to study piano, I was shocked when my teacher, who was a renowned pianist when he was alive, handed me Bach’s piano score without any additional notations. 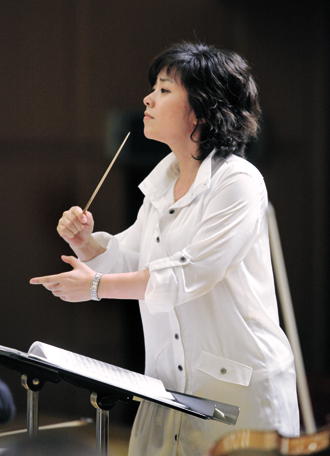 In Korea, there are many music scores with signs like crescendos or fortes, although there aren’t any in the musician’s original score. What he gave me was just such a pure score of Bach without any of the signs - and he told me to make a story out of it.

I remember spending one whole month practicing the score and painting it with a story and telling the story as I played the piece. I can never forget that experience as it helped me realize that every music has a story. But most of the time, we, the musicians, play music as though there’s no story to it.

And that’s when I thought opera, which clearly has a story, is what I really want to do. It not only has a story, but also everything I enjoy doing ranging from stage design to acting.

There’s no orchestra in Korea that is only dedicated to opera and your goal is to create one. Why is it so important to have a professional opera orchestra?

When I first came to Korea, I was upset about the fact that there’s no opera orchestra and was ambitious to create one. But I’ve realized that it is very difficult in Korea as the country doesn’t have opera theaters in every city, not to mention the low number of opera performances being performed compared to European countries.

But Korea has reached an era in which we no longer die of hunger. Koreans’ quality of life has upgraded and we are now in an era in which we need cultural fulfilment. With a lack of cultural content, mere material prosperity will never satisfy or make this generation of Koreans happy.

Unlike classic orchestras, opera orchestras need a tremendous amount of time and effort to learn the story and to keep in tune with the performers. But for a normal orchestra to practice for an opera piece, it has to start from the very beginning when there’s limited time. In such a system, it is difficult to achieve a high standard in Korean opera orchestra.

What do you want to say to your female students who wish to become conductors?

There was one member of the audience who came up to me after my performance. She was a woman in her 50s. She said that she gained strength to live a new life after watching me perform. At the moment I just thanked her for the compliment, but later when I shared it with my friends, they told me that the woman must have been moved by my courage to stand on a podium that was probably only possible for males.

Despite being a woman, I stood on a podium, conducted an orchestra as well as, or even better than, other male conductors, and I touched one woman’s heart. I want to tell my female students or all the other women who wish to become conductors to go ahead without hesitation. But it must be what you really want to do. If you have even 1 percent of doubt, look for something else, because it isn’t easy.