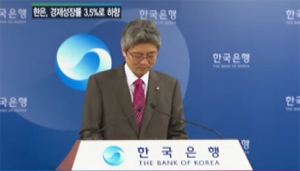 Mounting worries about a possible rupture of the euro zone due to Greece’s debt woes have pushed down Korea’s economic growth forecast for the year.

This is the third-released adjustment over the past year. Last November, it lowered its forecast from 4.3 percent to 3.8 percent.

The think tank also forecast the country’s economic growth to rise to 4.1 percent next year but warned that growth could come in at less than 3 percent if the Greek situation worsens further.

“We will ask Moody’s and the International Monetary Fund to assess the country’s economic fundamentals in June, and will get all kinds of measures ready to deal with emergency situations that would be triggered by Europe,” Bahk said yesterday in an emergency meeting with government policymakers.

According to the KDI, the Korean economy achieved 3.6 percent growth last year.

“If the euro zone breaks up due to Greece’s exit, forecasts of growths now will mean little,” warned Lee Han-kyu, a research fellow at the KDI.

The country’s exports will grow seven percent this year, the institute projected.

The Finance Ministry has made economic policy based on its estimate of 3.7 percent growth this year.

If it revises that forecast downward in the next month, its plans would need to be revised, according to the KDI.

However, since the latest downward adjustment in the growth forecast is relatively small, said Yoon Byung-tae, director of the fiscal program evaluation division at the Finance Ministry, adding that there won’t be any immediate revisions.

“The KDI cut its growth forecast mainly due to dwindling exports, which is one of three composites of the country’s gross domestic product along with public spending, private consumption and investment,” Yoon explained.

“At the moment, rather than making a big adjustment in policy, promoting more consumption and investment in the private sector could be one measure,” he said.

The KDI report showed domestic consumption and investment jumped by 2.7 percent and 8.1 percent, respectively, in 2011 over the previous year, which is a healthy sign for future growth.

“The government will find out what parts of the budget have not been spent yet, and will try to divert that money to be used for market stabilization,” Yoon said.