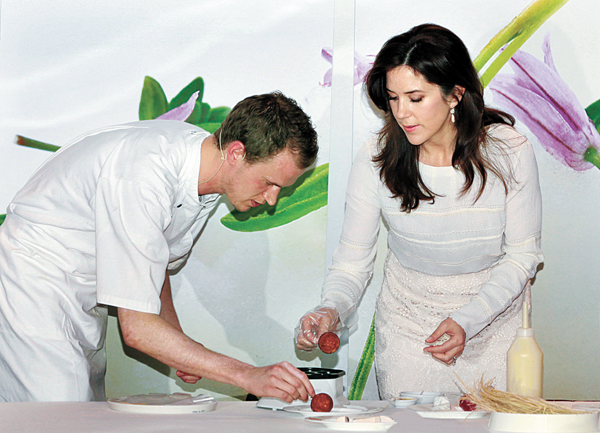 Crown Princess Mary of Denmark prepares, aebleskiver, a Danish pastry, for a food seminar at the Grand Hyatt Hotel, central Seoul on May 14, on the last full day of the Danish Royal Couple’s six-day visit to Korea. By Park Sang-moon


Crown Princess Mary Elizabeth Donaldson of Denmark smiled as she poked with a toothpick the sizzling aebleskiver, a Danish treat cooked in a cast-iron pan that looks like a popover, but has the consistency of a pancake. “Am I doing this correctly?” she asked.

“Yes, your Royal Highness,” replied the chef, during the food presentation at the Grand Hyatt Hotel, central Seoul, on May 14, then explained to some 100 culinary experts, Korean food experts and the press that aebleskiver could commonly be eaten before Christmas, with jam, but could also be served savory.

The Crown Princess injected a delicate lumpfish roe cream into the round pastries to complete the dish.

The Danish Food and Gastronomy Event was a part of a one-day conference called “Inspiring Denmark” attended by the Danish business delegation headed by Crown Prince Frederik of Denmark and the Crown Princess, in which Korean distributors, businessmen and specialists attended seminars on trade, architectural design, food, clean energy and defense technology.

The gastronomy event was an opportunity for Korean distributors and companies to meet with Danish food exporters. In the second part of the event, AOC Copenhagen, a Danish restaurant, held a presentation of “New Nordic Kitchen” dishes. The innovative Michelin-starred restaurant emphasizes simple and elegant dishes using local produce with a modern spin, and the ingredients used for the presentation and tasting session were supplied by Danish producers.

The Nordic cuisine presented by the restaurant’s chef, who flew in to Korea, included burned bread with smoked cheese and dried trout, chicken breast cooked in browned butter and burned hay, a whole radish filled with herb cream and the aebleskiver.

The Australian-born princess met the Danish heir apparent in Sydney during the 2000 Summer Olympics and their marriage in 2004 was greatly touted by the public as a modern fairy tale.

The royal couple won over the Korean public on their six-day official visit with the prince’s handsome Nordic features and the princess’ impeccable fashion. The royal couple arrived in Korea on May 10 upon the invitation of Prime Minister Kim Hwang-sik, for a six-day official visit that included attendance of the two-day Global Green Growth Summit and the opening ceremony and Denmark Day at the Yeosu Exposition. Three Danish ministers and a business emissary comprised of the representatives of 77 Danish companies accompanied them.

Denmark has doubled food exports to Korea over the past three years, said Mette Jasper Gammicchia, Market Development Manager of the Danish Agriculture and Food Council, and exports to Korea in just agriculture and food are 1.13 billion Danish krone ($194 million) and another 550 million krone for pork, poultry and dairy products. “The Crown Princess is very interested in food, so with communication with the Royal Court and the AOC chef, we decided upon the presentation today,” said Gammicchia.