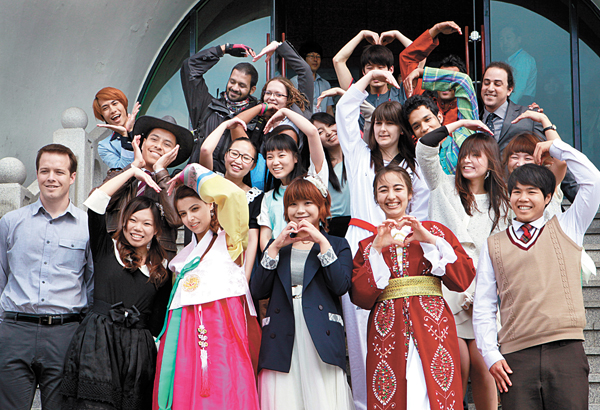 The 21 finalists for the 15th World Korean Language Speech Contest for Foreigners pose at Kyung Hee University on May 17. By Park Sang-moon

The competition, hosted by the college’s Institute of International Education and Yonhap News Agency, is the most prestigious of its kind in Korea and does not discriminate based on age, nationality or background, the organizers said.

“Korean is now more popular than ever, due to a number of factors including our improved national brand image and the ever-increasing popularity of K-pop,” said Kim Jung-sup, director of the institute. He said the contest has established itself as a well-known “brand” in the country.

It was launched in 1998 with 100 applicants to commemorate the 600th anniversary of the birth of King Sejong, who invented the Korean alphabet, hangul. This year, the number of first-round applicants swelled to over 1,200 - each had to send in a three-minute manuscript in Korean - with 21 being selected from a total of 19 countries for the final.

They included an immigrant worker from Sri Lanka, a Vietnamese boy attending Korean high school, a former U.S. military intelligence linguist and a French girl wearing a taekwondo uniform and holding a bottle of soju.

They gave speeches in fluent Korean on the two themes of “My favorite K-pop” and “Personal experience with Korean culture,” with Ashik Rahman of Bangladesh starting the proceedings.

The grand prize went to Yadav Bhupender, an Indian graduate student studying Korean language and literature at Seoul National University. Bhupender elicited laughter from every corner of the auditorium when he showed up in full mountain gear - complete with K-2 hiking shoes, a Gore-Tex jacket and a walking pole - and regaled listeners with his witty observations of Korea’s fashion-conscious and alcohol-fueled climbing practices. “Do they go climbing to drink?” he asked rhetorically at one point.

Bhupender said he got over his initial culture shock and developed a close connection to Korea, even growing fond of hearing locals scream “ya-ho” on mountain peaks and ajummas trot out old Korean pop songs. His win was particularly inspiring as he was eliminated from the first round last year.

“I want to serve as an inspiration to any foreigner who is afraid of learning the Korean language. My advice is that you keep trying and meet more locals and practice Korean at all times,” he said.

The judges also came from various backgrounds and the evaluation criteria were exhaustive. “The evaluation standards are composed of three parts: contents [creativity and logicality], expression [fluency, pronunciation] and attitude [appeal to audience],” said Baek Bong-ja, the former president of the International Association for Korean Language Education.

“This competition inspires me to study more Korean as many contestants speak better Korean than me,” said another of the judges, Cristina Confalonieri. The Italian expat has become famous for playing up her amusingly accented Korean on local TV shows.

Another judge, celebrity and actor Lee Sun-ho, said he noticed an “increase in popularity, sponsorship and public interest in this year’s competition.”

The audience also enjoyed a group performance by the university’s official Taekwondo Club as well as K-pop performances by NU’EAST and FIRST.