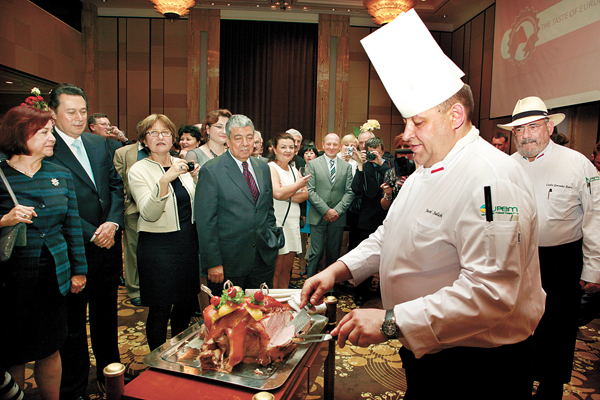 Attendees at Poland Constitution Day on May 9 look at a Polish pork dish at the Millennium Seoul Hilton, Jung District, central Seoul. By Park Sang-moon


The Polish Embassy in Seoul celebrated Poland Constitution Day on May 9 at the Millennium Seoul Hilton, Jung District, central Seoul, with high-ranking diplomats, government officials and businessmen in attendance.

“Let me first welcome all of you on this Polish National Day celebration. We call it Poland Constitution Day, which commemorates one of the most significant moments in Polish history that happened on May 3 of 1791,” Polish Ambassador to Korea Krzysztof Ignacy Majka said in his congratulatory speech.

“Few people, however, know that this was the first constitution in Europe, and the second in the world after the American declaration of independence of July 4, 1776.”

“The May Constitution changed the political system in Poland and gave us a modern democratic law, separating the legislative, executive and judicial functions.”

Introducing an official delegation of the Polish Ministry of Agriculture and Rural Development, the ambassador emphasized the developing relations between the two countries, especially in the economic sector after the implementation of the Korea-EU FTA.

“Poland has become an important manufacturer in Europe for Korean companies and Korea is one of the largest direct investors in Poland,” he said. “The mutual trade has increased 35-fold over the last 20 years, to $4.5 billion in 2011 from just $125 million in 1989.”

As an example of growing friendship between Poland and Korea, the ambassador said more and more local governments in Poland have named their streets after Korea, such as Korea Street, Seoul Street or LG Electronics Street.

At the event, Marek Sawicki, the Agricultural Minister of Poland, also joined the official delegation of the ministry, in an effort to promote Polish products to Korean investors.

“We exported 60,000 metric tons of Polish meat to Korea last year and we expect the amount to increase this year,” Wieslaw Rozanski, Deputy of the board at the Union of Producers and Employers of Meat Industry in Poland, told the Korea JoongAng Daily.