Robin Gibb, soaring voice behind the Bee Gees, dies at 62

Robin Gibb, soaring voice behind the Bee Gees, dies at 62 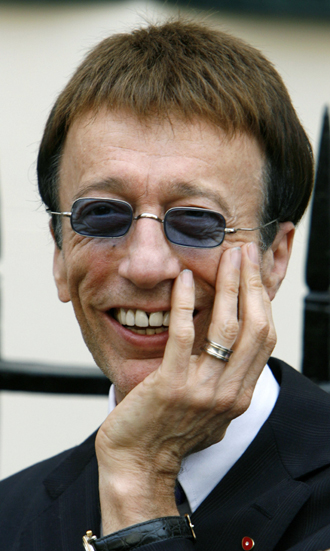 LONDON - Robin Gibb, whose soaring vocals formed part of the unique Bee Gees sound, has died at the age of 62, leaving Barry as the sole surviving member from the band of brothers.

The high-pitched close harmonies, sharp songwriting and disco-defining sound of elder brother Barry, Robin and his twin brother Maurice made them one of the biggest-selling groups of all time. Robin lost his battle against cancer of the colon and the liver on Sunday, a month after confounding doctors by emerging from a coma after suffering pneumonia.

He underwent surgery in August 2010 for a blocked intestine - the same condition that killed Maurice in 2003 - but a tumor was found and he was diagnosed with cancer.

The singer looked gaunt in his last few months as he struggled against the relentless disease.

Andy Gibb, their younger brother who was not in the Bee Gees, died in 1988 from cocaine addiction. “I sometimes wonder if all the tragedies my family has suffered - like Andy and Maurice dying so young and everything that’s happened to me recently - is a kind of karmic price we are paying for all the fame and fortune we’ve had,” he told Britain’s Sun newspaper in March.

Robin enjoyed a musical career spanning six decades, from humble beginnings in the 1950s singing with his brothers in cinemas, to his recent first classical venture “The Titanic Requiem,” penned with his son Robin-John. Gibb was too ill to attend the April 10 premiere, where he had been due to perform the song “Don’t Cry Alone.”

“It’s not about how complicated music is; it’s about how simple and relative to the human spirit it is,” Gibb said on his new composition.

The singer and his wife-to-be Molly Hullis survived the 1967 Hither Green rail crash in southeast London that killed 49 people.

“I do think it is easier for me to walk in the shoes of the people who were on the Titanic,” he wrote in The Mail on Sunday, a tabloid newspaper, in January.

“I know what it is to live through a mass disaster .?.?. it haunts me to this day.” Robin Hugh Gibb was born on Dec. 22, 1949, on the Isle of Man, the British crown dependency, about half an hour before Maurice.

Soon after the twins were born, the Gibb family moved to Manchester, northwest England, and then to Brisbane in Australia in 1958. The Bee Gees soon became child stars and had their first hit in 1963, “The Battle of the Blue and Grey”, and performed on national television.

“We used to say that we were one soul in three bodies. We worked with such spirit between us, able to read each other’s thoughts when we wrote together,” Robin said. The trio returned to Britain in 1967 where they soon had several more successes, including the U.K. No. 1 “Massachusetts.”