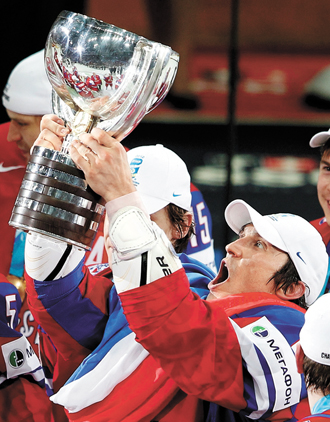 Alexander Semin of the Washington Capitals scored two goals and had an assist in the rout. Russia scored three times in the second period to take control.

Alexander Perezhogin, Alexei Tereshenko, Detroit’s Pavel Datsyuk and tournament MVP Evgeni Malkin of the Pittsburgh Penguins scored the other goals, with Datsyuk and Alexander Ovechkin of the Capitals assisting on two.

Slovakia defender Zdeno Chara of the Boston Bruins scored both of his nation’s goals, one on a blast from the blue line, the other from close range.

Russia, the champion in 2008 and 2009, returned to the title after finishing fourth last year. It did not lose in 10 games and finished the tournament with a plus-30 goal difference.

“But without Alex Ovechkin and Pavel Datsyuk it would be very hard to score all those goals. And Evgeni Malkin, what can you say? He’s the best player in the world, for sure.’’

Malkin led in goals with 11 and points with 19, and led the plus-minus ratings at plus-14, along with teammate Perezhogin.

Datsyuk was another top performer who glued together his colleagues to play cohesively. He talked positively about his prized teammate Malkin.

“He was unbelievable all the way, and deserves all the credit he got. I am happy to play with him again,’’ Datsyuk said.

Topped with seasoned stars who seemed hungry and happy, Russia put on a tremendous final show of skating speed, passing technique and imagination. It was a performance oozing self-confidence.

“I had to remind the team that Slovakia is really good, and that they beat the Czechs and Canada. I’m grateful to my team as they played well, not only in this final but in the whole tournament,’’ coach Zinetula Bilyaletdinov said.

Malkin, Datsyuk, Ovechkin and Semin did not disappoint anybody. But the play of Alexander Popov, 30, centering Malkin and dangerous winger Perezhogin was sensational, and on the third line Alexei Tereshenko’s swiftness stood out. In its own zone, Russia played a very tight five-man block, with players almost stuck to each other.