Feeding the world with talent - like eBay for job market

Feeding the world with talent - like eBay for job market 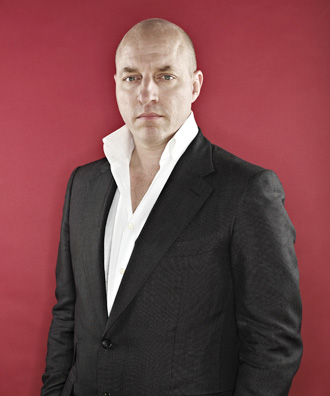 The term outsourcing used to refer to call center agents, factory workers and other low-grade jobs, but in the digital age it now encompasses advanced positions such as accounting and even aerospace engineering.

In an interview with the Korea JoongAng Daily, Matt Barrie, CEO of Freelancer.com, said his company only provides services in English but it will launch a Korean-language service this year.

This is aimed at helping the site, which ranks as the world’s largest online outsourcing marketplace for professionals, tap into a market that features cutting-edge technology but where outsourcing is underrepresented, he said.

“Every industry is digitalizing and software is eating the world,” Barrie said. “Korea is very aggressive and innovative, and technology is deep. It is going to be a great market, both as an employer market but also a market to send work. If you want to have sophisticated electronic and robotic devices, this is a perfect place.”

The Australian entrepreneur was in Seoul last week to attend the Kanz Broadband Summit 2012, an annual conference for IT experts and policy makers from Korea, Australia and New Zealand.


Q. Is the future bright for the global outsourcing market?

A. Globally it is very bright. 70 percent of the world population aren’t connected to the Internet. But when they are, they will want a job because they’ll obviously want to raise their living standards.

Everyday, the Internet is getting faster and deeper, and more industries are becoming software businesses. So the types of work people can do with the Internet are getting better.

Korea is a vastly underrepresented market place. We have a huge representation from Asia, mainly from the Philippines and India, where the second language is English. Out of 3.5 million people, we only have 3,000 Koreans.

One of the reasons I’m here is because I want to find partners here. I want to roll out a Korean-language service to break into the market. 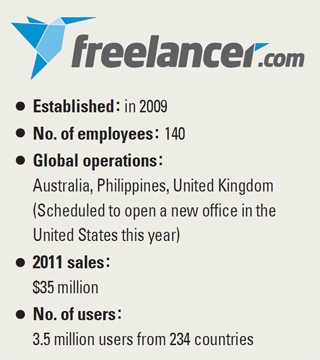 Why is Korea so attractive for you?

I was at the World IT Show at Coex [in Gangnam, southern Seoul] and I was so impressed by the technology industry here.

The conference was more impressive than South by Southwest, which is the biggest interactive film and media conference in the U.S. The technology [at the U.S. fair] was all about social and music apps for iPhone, but when I walked around the trade show here it was deep technology, robotics and 3-D displays.

All the mobile phones had NFC technology for payments. I haven’t seen a single phone in the U.S. or Australia that has got NFC built in. Korea is very aggressive and innovative, and technology is deep.

Korea is going to be a great market, both as an employer market but also as a market to send work to.

How is the global labor market changing?

As a result of massive changes in the demographic of Internet users, more people have connected in the last three years in China to the Internet than the entire population in the U.S. Already, on the U.S.’ top 10 Web properties including Facebook and Google, 80 percent of traffic comes from foreign sources. Almost any job you can think of now can be done by someone anytime on the other side of the world, potentially for a fraction of the cost.

The Internet is disrupting the global labor market, and this is where my business comes in. We’re like eBay for jobs.

What are some of the benefits of outsourcing jobs online?

We empower small entrepreneurs and individuals to get things done .?.?. we get them a digital work force. We’re also empowering people in emerging economies like India, Bangladesh and the Philippines. You might be in Bangladesh and you might want to be a search engine optimization expert, [but] it might be pretty difficult for you locally to find a good job and get paid good money. Now you can jump into our market place and we have thousands of jobs posted a day.

Even three years ago in the U.S., people were asking, ‘What? You’re saying that Bangladeshis are working on your Web site? ‘Do they speak English?’

Two years ago, there was no way you could land an aerospace job online, but I actually saw positions posted two weeks ago [on our Web site.] Every year, it amazes me what people are doing.