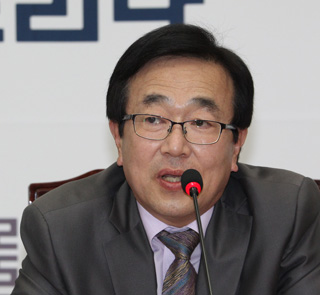 A key Park Geun-hye loyalist was named yesterday secretary general of the Saenuri Party, solidifying her control over the conservative ruling party in the months leading to the December presidential election.

Representative Suh Byung-soo, who will begin his fourth term representing a Busan district at the end of this month, was put in charge of the party’s financial and organizational affairs, Saenuri spokesman Lee Sang-il said yesterday. The appointment was formally endorsed at the party’s Supreme Council meeting yesterday.

The key leadership positions in the Saenuri Party are now filled with Park loyalists, completing the lineup to support the presidential frontrunner. Although the party still has to elect its presidential candidate through a primary, Park has a commanding lead.

Representative Hwang Woo-yea, the party’s new chairman, is known as a reformist but he has maintained a close relationship with Park. He was elected to the post last week with the support of Park loyalists. Representative Lee Hahn-koo, elected as the new floor leader earlier this month, is called Park’s economics tutor.

Introducing Suh as “the big shot representing the Gyeongsang region,” Hwang told the Supreme Council that he has faith in Suh to work hard to prepare for the presidential campaign.

Suh, 60, entered the politics by winning a by-election in Busan in August 2002. Since then, he managed three consecutive re-elections. Known for his gentle demeanor, Suh is considered a policymaker with a strong academic background in economics.

In a move to balance out the Park loyalists’ control over the leadership, the Saenuri Party appointed Representative Kim Young-Woo, a Lee Myung-bak loyalist, as its new spokesman. “I will work to become the heart of the Saenuri Party to better communicate its vision to the public,” Kim said.

It remains to be seen how the three Park loyalists in the leadership will manage the party’s presidential primary. While other candidates such as Chung Mong-joon, Kim Moon-soo and Lee Jae-oh demanded a totally open primary that included votes from the public, Park has insisted on the current system.

Currently, the ruling party’s nominee is decided by a mix of party delegate votes (which contributes 20 percent of a candidate’s total score), party member votes (30 percent), voting open to the public (30 percent) and opinion polls (20 percent).

In the 2007 presidential primary, Park won the most votes from party members and delegates, but lost to Lee Myung-bak because he had a higher public opinion poll score.

Park is taking some rest and is expected to launch her presidential primary campaign next month.