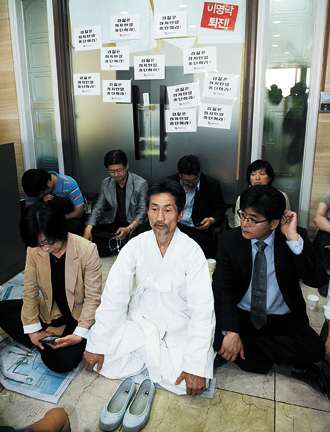 Kang Ki-kab, in traditional Korean attire, the interim head of the official emergency council of the opposition Unified Progressive Party, stages a sit-in protest before the doors of their party headquarters in Daebang-dong, Seoul, yesterday as prosecutors attempt a raid on their office to investigate a rigged primary. By Kang Jung-hyun

Prosecutors raided the headquarters of the Unified Progressive Party to probe whether its primary in March was rigged amid rising concerns that the party is on the brink of a split.

About 20 prosecution investigators stormed the UPP headquarters in Daebang-dong, southern Seoul, after a far-right civic group called “Right Korea” filed a complaint that the party allegedly rigged the March primary for proportional representatives to the National Assembly. Roughly 50 policemen blockaded the entrance to the building to prevent physical clashes.

Prosecutors told reporters they wanted to confiscate all materials related to the primary, especially the electoral rolls, which have information on all UPP members.

However, party members locked the door of the office and physically blocked the policemen and prosecutors. Interim leader Kang Ki-kab and other members squatted in front of the door and said they would never surrender the electoral rolls. 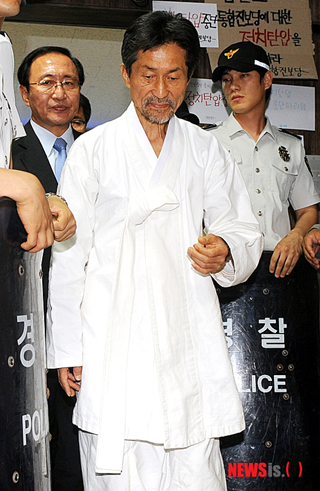 “Amid the public uproar [over the vote-rigging allegations], prosecutors are hampering us from reforming the party,” Kang told reporters outside the building. “Confiscating the electoral rolls, which is the heart of a political party, means confiscating the entire party.”

The prosecution raid actually brought the party’s two warring factions together briefly. The smaller faction has said the primary was rigged and the representative candidates chosen in it should forfeit their positions. The larger faction, the so-called Gyeonggi Dongbu Alliance, says accusations of rigging are exaggerated and its members refuse to forfeit their positions. Both factions have appointed emergency councils to run the party.

Lee Jeong-mi, spokeswoman of the leadership chosen by the smaller faction, said at a briefing in the National Assembly: “Now prosecutors are intending to investigate all of the party’s materials related to the election including the electoral rolls, which violates the basic right of a political party guaranteed in the Constitution, and we will strongly resist it.”

The larger faction’s emergency council called the prosecutors’ storming of the office “a plot to demolish a liberal party.”

“The fate of a liberal party is at risk from the Lee Myung-bak administration and police authorities,” Kim Mi-hee, spokeswoman of that emergency council, said. “We will fight to the death against this persecution and the plot by authorities to destroy the UPP.”

About 50 policemen carrying shields were dispatched to the building. Some party members trying to enter the office fought with policemen blocking them. Those who failed to get into the office staged a protest. The two sides clashed all day long in front of the locked door.

Prosecutors said they have already made 10 raids at other locations and gathered evidence, including some communication companies that managed the online voting.

As of yesterday, four of the 14 candidates who ran in the primary said they wouldn’t resign. The smaller faction’s emergency council previously declared they would expel candidates who didn’t give up their positions by yesterday.

The council was supposed to convene a meeting yesterday morning, but was delayed because of yesterday’s raid.

Lee Seok-gi, who won the largest number of votes in the primary, and Kim Jae-yeon, who got the third-largest, didn’t submit applications for abandoning their parliamentary seats. They are inner-circle members of the Gyeonggi Dongbu Alliance, and they maintain the primary wasn’t rigged.

Complaints of rigging are growing.

“At a factory of Hyundai Motor in Jeonju, there were about 300 UPP members,” the post read. “Do you know how we cast our ballots at the time? We had our own candidate, who works at the factory, but we were ordered to vote for Lee Seok-gi, whom we have never seen before.”

They said that UPP members visited the factory with laptops and ordered them to vote for Lee on the spot through the laptops.

The party’s internal probe said it found a large cluster of online ballots cast through the same IP addresses.

Lee, who is known as a de facto leader of the Gyeonggi Dongbu Alliance, won in the North Jeolla region by a large margin in online voting, receiving 10,183 votes compared to rival Lee Yeong-hui’s 2,097 votes.