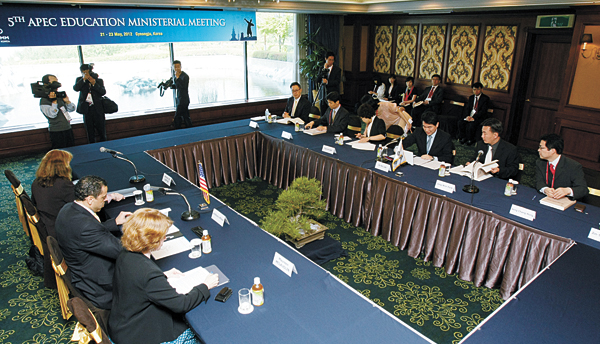 In an interview with the JoongAng Ilbo yesterday, 53-year-old Phillips, director of Education, College Ready in the United States Program, of the Gates Foundation emphasized the importance of teachers for education reform and said, “The center of all educational policies is the teacher.”

“In reality, teachers are the ones who teach and foster students,” she said, and “the Foundation only supports qualified teachers and schools.”

Phillips is a speaker at the three-day APEC meeting with the theme of “Future Challenges and Educational Responses: Fostering Global, Innovative and Cooperative Education.” The meeting is being held for more than 100 delegates, including educational ministers and delegates from the 21 APEC members, and will run through tomorrow. Attendees are also slated to visit Korean elementary, middle and high schools, along with the Pohang University of Science and Technology.

Phillips said that especially for students from low-income families and ghettos, “education is their only hope,” and said it was the role of the teacher to draw out the potential in such students and enable them to attend classes instead of dropping out.

Having started her career in education as a high school teacher, Phillips served as secretary of education and chief state school officer for the state of Pennsylvania and superintendent of Portland Public Schools in Oregon, before joining the foundation in 2007.

In conjunction with 44 states, the Gates Foundation, worth some $40 billion, grants aid to schools that show a high-level of academic standards, especially in math and languages arts, or the common core state standards. Through assessment of schools, the quality of classes will become higher and also provides an incentive for excellent teachers, said Phillips.

When asked her view on school violence, a prevalent societal issue here, Phillips replied, “It’s the same in the United States.” She said the reason why students deviate has to do with the “school not giving them a sense of belonging.” Teachers have to actively instigate an environment where students at least within school boundaries can be given autonomy and build a peer group that they can depend on, she said.

In order to vitalize society’s contribution to educational donations, Phillips said that “personal success is a kind of debt to society” and that “there needs to be an increase in the mentality of returning to society in order to pay back that debt.”