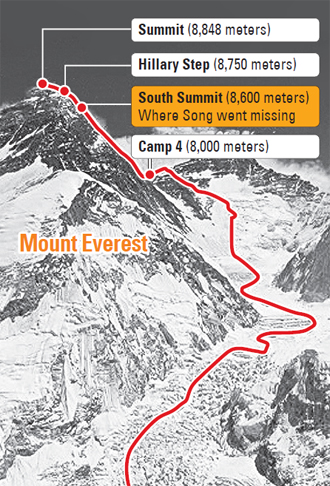 An amateur Korean climber went missing on Mount Everest over the weekend while descending from the summit and is presumed to have fallen into a chasm and died, according to his fellow climbers and the Korean Embassy in Nepal yesterday.

Congestion on the world’s highest mountain is suspected to have contributed to the accident.

Several other climbers from other countries also went missing around the same time, one observer told the JoongAng Ilbo, which could make it one of the deadliest days on Everest in 16 years. In 1996, when weather conditions were poor, 12 climbers died on Everest in one day.

Song Won-bin, 44, is presumed to have fallen off a cliff at 8,600-meters altitude Saturday while returning from the peak of the 8,848-meter mountain, Park Gye-hoon, the head of the Korean amateur climbing group told the JoongAng Ilbo by telephone.

“He is presumed to have gone missing due to acrophobia and exhaustion,” Park said.

The 10-member group were alumni of Chungnam High School in South Chungcheong, who planned the trip to celebrate the 50th anniversary of the school.

Song and Kim Yeong-il reached the summit Saturday morning while the other eight Koreans were waiting at a base camp at 8,000-meters altitude, Kim Jeong-soo, a diplomat at the Korean Embassy to Nepal, told the Korea JoongAng Daily. Kim Yeong-il, who was with Song when he went missing, may have more details later, the diplomat said.

Park said the group will attempt a search and rescue mission for Song.

AFP is reporting that Song, a German and a Canadian all died that day, quoting tour agents and officials. In addition two other climbers, a Chinese national and a Nepali guide, were also missing, AFP reported. The Korean government had not confirmed Song’s death.

According to Park, the casualties Saturday were partly caused by congestion on Everest. On Saturday morning, around 100 people lined up on the route from the 8,000-meter point to the peak, he said. Park said Song appeared to be stuck in the congestion at the time he went missing.

Nam Seon-woo, head of a local climbing research institute, said the Nepali government and commercial climbing groups have overloaded the mountain with amateurs.