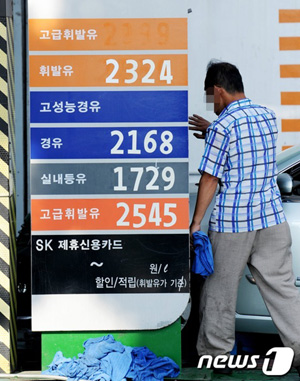 More than 50 members of a notorious group, better known as the “Bongchun gang,” were indicted on Sunday for distributing 70 million liters’ worth of fake gasoline, raking in more than 110 billion won ($94.1 million) over a period of six years. The group is based in Gwanak District, southern Seoul.

The gang was found to have sold fake gasoline at 19 gas stations directly operated by the gang members themselves in the Seoul metropolitan areas from 2005 to 2010, helping the group raise its operation funds.

Fake gasoline is made of fuel additives like Cenox that aren’t taxed and cost less than regular gas. They’ve been illegal since 2006, but gain popularity when the price of oil skyrockets. Profit margins are higher for gas stations that sell regular gas.

It is the largest volume of fake gasoline ever distributed in Korea. Assuming that a driver fuels up with 50,000 won worth of gasoline on average per each pump, it means that around 2.2 million customers were swindled during the six years without knowing it was fake gasoline.

According to the Seoul District Public Prosecutors’ Office, the Bongchun gang was initially involved in loan-sharking and demolition businesses as their main source of income.

However, in 2004, the gang met a businessman surnamed Yang, who produced and sold fake gasoline, and became involved in the illegal business as Yang became one of the top three bosses of the gang.

Based on the profit the group reaped, however, the top-level gang members enjoyed luxuries while ordinary gang members in lower positions were given less than minimum wage.

On the same day, the prosecutors’ office also arrested 45 members of the “Dapsimni gang,” including a 41-year-old senior member surnamed Min, on similar charges.

The Dapsimni gang, also indicted and charged together with the Bongchun gang, became known in 1988 when their member maimed a member of a rival group, the Jangan gang, with a sickle during a group fight and started to grow ever since that incident due to the gang’s notorious cruelty.

The Dapsimni gang and the Bongchun gang came to the brink of war after a long-standing violent history between the two.

The Dapsimni gang members perpetrated 31 criminal acts of violence since 2000. These criminal acts included assaulting innocent civilians because they gave a gang member a dirty look or attacking a fried chicken restaurant delivery boy because the chicken was not fully cooked.

“These gangs continuously disturb the law and public order and we will do our best to monitor organized criminal activities,” said an official from the prosecutors’ office.