Park Chu-young: Come out, come out, wherever you are

Park Chu-young: Come out, come out, wherever you are 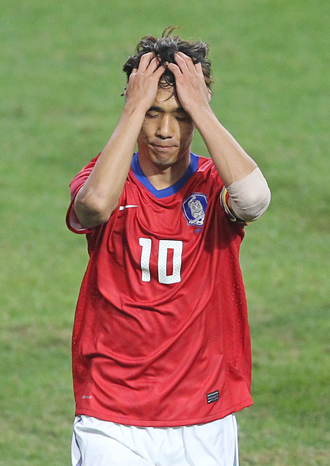 Come out, come out, wherever you are.

This is what local media and football fans have been shouting out to Arsenal striker Park Chu-young, who remains “missing” to this day. While most people would ask about his military-dodging issue if Park comes out of hiding and speaks to the public, at this moment, many people will probably ask this question, too: Do you really have the desire to play for this country?

Last Friday, national football team manager Choi Kang-hee announced his 26-man squad for a friendly against Spain on May 31 and two final-round Asian qualifiers for the 2014 FIFA World Cup - Qatar on June 9 and Lebanon on June 12. But on the list, Park’s name was absent.

This was not the result of the Korea Football Association passing on Park. It was actually Park abandoning his opportunity to represent the nation.

There were two major obstacles hurting Park’s chances to become a national team member again. The first was his form, which due to a lack of playing time with Arsenal was subpar. The other was people’s negative perception of his military issue. Many accuse him of finding loopholes in the currently military law to avoid mandatory service. But despite these obstacles, it turns out that a third problem also sabotaged Park’s place in the squad: his ego.

Before announcing the roster, Choi had been hinting that he would like to include Park even though he struggled to play with Arsenal. The 27-year-old striker played only seven minutes in the English Premier League, but Choi valued Park’s international experience (58 matches, 24 goals) and what he has contributed to this country so far.

Regarding the military issue, Choi already had a remedy for Park: holding a press conference and expressing his honest opinion.

In fact, the KFA tried to organize a press conference for Park. It was reported that the KFA asked Park to take part in an open press conference on May 15, but the offer was rejected. The KFA again tried to contact him after the refusal, but this time, the former AS Monaco and FC Seoul player suddenly disappeared.

The KFA and even his fellow teammates have no idea about Park’s whereabouts. According to Ilgan Sports, the JoongAng Ilbo’s sports daily, Park already sneaked into the country on May 14 and is now staying with his family.

Choi said that he and the KFA waited until midnight on Thursday for Park’s call, but didn’t hear anything from him in the end. Leaving Park off the roster was a completely rational decision. How could the KFA pick a player who is out of contact?

Although some players have rejected a KFA request due to personal reasons in the past, I have never heard of a player ignoring the football association. It seems the former national team captain has lost interest in representing Korea.

This situation is not only bad for Park, but also bad for Korean football. Now, Olympic football team manager Hong Myung-bo also needs to reconsider his plan to select Park as a wild card member for the London Olympics. In addition, this incident already sets a bad example for young footballers who aspire to wear the national team uniform.

However, Park himself can still turn the tables around and contribute for this country again. In fact, Choi has not closed the door on him entirely. The 53-year-old coach said during the press conference that he still wants to help the player not only as a coach, but also as a senior footballer.

The Gunners striker is known to be reluctant to speak before the public, but if the coach still believes in him, I think it’s not too late. If Park still has desire a to play for Korea, he needs to end this hide-and-seek game right now and address his military issue.

Park might feel bothered by why his military delay is such a big issue to the pubic as his actions were not illegal. But Park needs to know that national team members are Korean citizens before they are athletes. Especially, in a country like Korea, military duty is a very sensitive national issue, and no one is free to hide from it.

What is certain is that silence will not move anything forward - it will only raise doubts and disappointment. The No. 10 jersey is still waiting for Park, and there is a way to wear it again if he really wants it.