To June 10: The Grand Hyatt Seoul is promoting its Free Dining Pass event. The hotel launched a restaurant site that provides information on the 12 restaurants and bars at the hotel earlier this month and allows patrons to make reservations online.

To celebrate, the hotel is promoting an event for those who make online reservations until June 10.

The Free Dining Pass event will select one guest through a lucky draw who will be awarded a free pass to six restaurants at the Grand Hyatt Seoul.

The winner will be announced online in mid-June.

To July 31: The Westin Chosun Seoul is offering a Guinness 1,000 promotion. All guests dining at Aria during weekdays can have a Guinness for 1,000 won (86 cents) per glass (330 milliliters). A pint usually costs between 10,000 won and 15,000 won at local pubs. The English-style fish and chips are also offered to all guests. 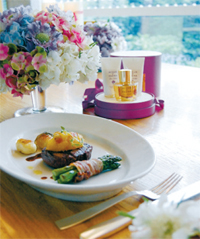 Ongoing: Park Hyatt Seoul’s main restaurant, Cornerstone, is promoting its package deal dubbed Will You Marry Me? Cornerstone will offer a private room that is decorated with ribbons, candles and flowers for a wedding proposal. The four-course dinner with a bottle of Nicolas Feuillatte Brut Reserve premium champagne can be enjoyed. Acqua di Parma’s Iris Nobile perfume set, A chocolate cake and a bouquet of flowers will also be provided. The package is available for other celebrations or private events. Reservations must to be made at least two days in advance.

Ongoing: Grand Hilton Seoul is promoting its promotional packages We Are Married, Honeymoon and Wedding Anniversary. Any couple that uses the We Are Married package will receive a room service gift certificate, sparkling wine with a cheese plate and a Hilton chocolate box. The guests will have access to the executive floor lounge, fitness club, swimming pool and sauna. The packages range from 290,000 won to 400,000 won

Ongoing: W Seoul - Walkerhill’s WooBar is promoting its 2012 DJ Party for those who are looking forward to the onset of summer. The first DJ in the series is the internationally renowned Italian Cristian Marchi, who is also often referred to as a superstar by fellow DJs. He will be performing on July 21.

June 1 to 30: The Renaissance Seoul Hotel is offering three different summer packages that allow visitors to take advantage of its indoor swimming pool and recreation center.

Meanwhile, Kid’s Day at Orangerie is held every Monday during which children aged 12 and under can eat for free when accompanied by an adult (one child per adult).