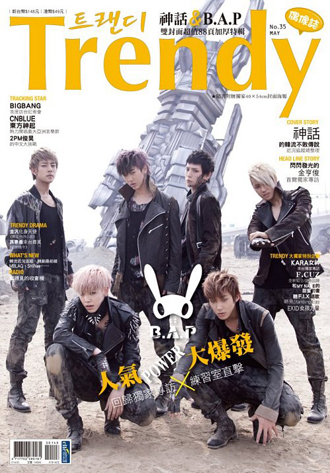 Just four months after it made its debut onto the K-pop scene, boy band B.A.P has become a cover model for Taiwan’s leading Hallyu magazine, “Trendy.”
Although the boy band has never even visited Taiwan, their popularity is soaring on the island, which resulted in the group securing the cover as well as a 10-page spread in the magazine.

“Trendy” is one of Taiwan’s leading entertainment magazine that specializes in K-pop. It is licensed and printed in Hong Kong, Singapore and Malaysia, too.
The circulation of the magazine stands at about 100,000 copies in Chinese speaking nations.

“The fact that the band was selected to be on the cover is huge, considering they’ve never visited Taiwan and they’ve never starred in any dramas,” said a representative from the publication.
In the may issue of the magazine, other K-pop artists to be feature include Big Bang, CN Blue, 2PM and Shinhwa among many others.