SM Town a success in LA

SM Town a success in LA 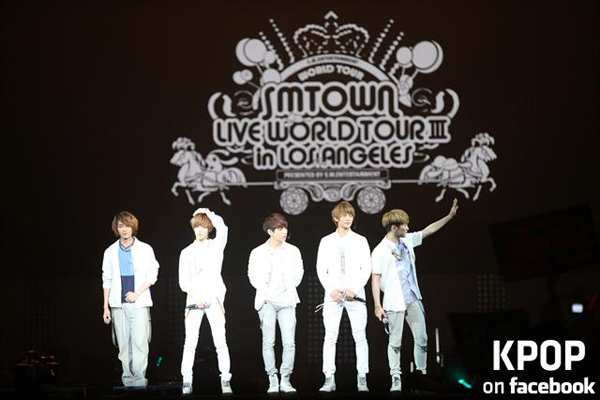 SM Town’s third world tour kicked-off in Los Angeles on May 20 at the Honda Center in Anaheim with more than 12,000 local fans flocking to the K-pop event.
Artists such as BoA, TVXQ, SHINee, Super Junior, Girls’ Generation f(x) and EXO performed one act after another, showcasing some of their greatest hits.

The bands shook things up by also singing songs out of the K-pop genre. Super Junior’s Kyuhyun and TVXQ’s Chagmin paired up to sing Bruno Mars’ “Just the Way You Are” while Girls’ Generation’s Jessica and Crystal of f(x) sang Katy Perry’s “California Girls” to the delight of fans.

Yet it seems that stars were not only found on the stage -- there were some heavyweights from Hollywood among the screaming fans, as well.
Singer Quincey Jones was present as well as some 200 music producers and composers from The Underdogs, the producers behind Beyonce’s “Listen” and Chris Brown’s “Turn up the Music.”
Actor Simon Curtis, who had previously tweeted his interest in Girls’ Generation member Sooyoung, was also present at the show.

The SM Town Live World Tour III will make stops in Taipei, Taiwan on June 9, and Tokyo, Japan from Aug. 4 to 5 before making its way back home to Seoul on Aug. 18.