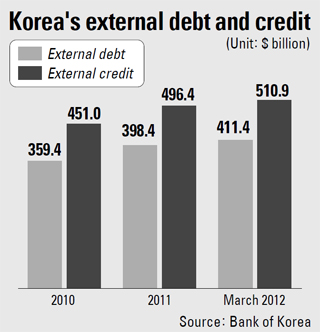 Korea’s external debt in the first quarter reached a record of over $400 billion as foreign investors expanded their investment in local bonds.

However, the central bank said the expanded external debt is not a threat to the financial markets or the overall economy since short-term debt, which presents the greatest risk, showed limited growth.

The country’s external debt totaled $411.4 billion as of the end of March, up $13 billion from the previous quarter, according to a report by the Bank of Korea (BOK).

The central bank said considering the country’s overall size and its trade-oriented economic structure, the debt is not a source of concern.

The increase was caused mostly by long-term debt, which rose by $12.8 billion in the period, while debt due to mature in less than a year edged up by just $200 million, the report said.

“Foreign investors purchasing $10.8 billion in domestic bonds played a part in the increase, while measures taken by Korean lenders to stockpile foreign liquidity in the face of persistent euro zone woes also contributed to the increase,” the central bank said.

Many short-term debts were converted into long-term, which reduced the borrowers’ exposure to unexpected turmoil, the BOK said.

The BOK said total debt accounted for 35.7 percent of the country’s gross domestic product at the end of last year, much less than for European countries, the United States and Japan.

By keeping close track of developments taking place in Greece and other euro zone members, Seoul plans to respond “flexibly” to any sudden changes, it said.

The report showed Korea’s external credit reached $510.9 billion as of the end of March with the country holding net credit of $99.5 billion, up $1.5 billion from three months earlier.

Foreign investment in Korea rose to $896.0 billion in the first quarter as overseas investors bought more stocks and bonds. This is a gain of $56.8 billion from late last year.

Outbound foreign investment, including securities investment, stood at $769.2 billion as of the end of March, up $27.2 billion from the previous quarter, the BOK said.