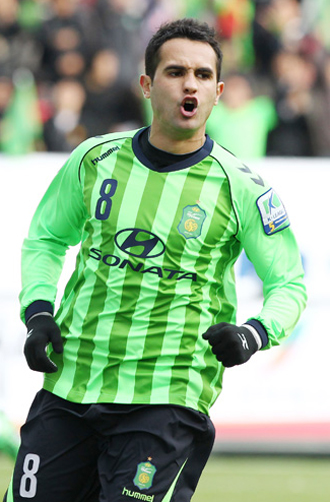 At its headquarters in Seoul yesterday, the sports law and punishment committee of the KOC held a meeting to discuss whether it should recommend Eninho to the Ministry of Justice for Korean citizenship, but after an hour-and-a-half discussion, it decided to hold its original decision that was made on May 7.

The KFA updated its data on Eninho and resubmitted the request last Tuesday following the KOC’s first rejection, but the top local sports governing body ruled that the 31-year-old Brazilian is still not qualified to hold Korean citizenship.

“There as lot of debate and thoughtful consideration, but we didn’t find significant factors to change our original result from the first review,” the KOC Secretary General Choi Jong-jun said after the meeting.

Choi said that the KOC, which governs 57 sports organizations including the KFA, decided not to recommend Eninho because he doesn’t seem to meet naturalization requirements stated under Article 5 of the nationality law.

“Special naturalization gives a person dual citizenship and waives naturalization tests, but in exchange for that, a basic understanding of Korean culture and language is essential,” Choi said. “However, we thought he lacked effort in those parts.”

The revised law on naturalization went into effect in May 2010 to allow foreigners to carry dual citizenship if they are considered to have the talent to contribute to Korean society. So far, four sports players, including basketball brothers Moon Tae-jong and Moon Tae-young, have benefited from this law.

While some people accuse the KOC’s decision on Eninho as being unfair compared to the Moon brothers, who also doesn’t speak Korean fluently, Choi said there were differences between the two cases.

“The Korean Basketball League was running a language program with Kyunghee University for naturalized players and since those two players are half-Korean, there were not many negative voices from the public.”

Choi also added that the KOC understands the KFA and national team manager Choi Kang-hee’s opinion that Eninho will be a big boost for Korea’s bid to reach the World Cup, but the organization had to consider fairness with other sports and the negative opinion of Koreans.

“This is a matter of allowing dual citizenship with granting Korean citizenship before selecting a national team footballer,” Choi said. “It should be treated in a different dimension.”

Choi said that the KOC can positively review the case in the future if those deficient conditions surrounding Eninho have improved. But the KOC also asked the KFA to prepare more thoroughly and operate efficiently for their supply of national team members.

“The KOC will set a more detailed process for recommending a sports player as a special naturalization candidate in the future,” Choi said. “We hope the KFA and the national football team are not shaken by today’s decision.”

Hwangbo Kwan, the head of the technical committee for the KFA, said that the football organization respects the KOC’s decision and will now only focus on the national team’s road to the 2014 World Cup. Korea faces Qatar and Lebanon next month.