With cloud on the horizon, Microsoft readies Windows 8

With cloud on the horizon, Microsoft readies Windows 8 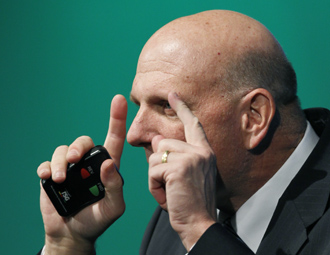 When Microsoft CEO Steve Ballmer gave his first keynote speech at the Seoul Digital Forum six years ago, words like Twitter and Facebook were unknown, he recalls.

But “changes that an array of innovative technologies has brought to the world [since then] seem like those made in a lifetime,” he said at the same forum yesterday.

The three-day digital conference, an annual event, is hosted by broadcaster SBS. This year’s theme is “Coexistence: technology, humanity and great hope for the future.”

The chief executive, who picked up the reins from founder Bill Gates in 2000, used his speech to present the R&D priorities for Microsoft and the IT industry that could trigger next-generation innovation in three to five years.

He first mentioned machine learning, a field of artificial intelligence that sees computers evolve based on their assimilation of data.

Although big data has become a buzzword lately, data becomes useful only when it is well managed, Ballmer said in explaining why he wants “computers to learn” to better utilize it.

He went on to discuss user interfaces, specifically the evolution from the mouse to wireless technology, touch-based interfaces and speech, vision and motion-based recognition.

Regarding cloud computing, which obviates the need for remote workers to directly access servers, he said, “Of course, everybody talks about cloud. But I think people are still underestimating the impact of cloud. Cloud has the potential to help develop applications that did not exist before. Facebook and Twitter could not exist without cloud and more unseen applications are expected in the next 10 years.”

He also discussed the importance of having a core platform, adding that the limited list of operating systems, such as Windows, Linux and Mac, is unlikely to be bolstered significantly in the next three to five years.

Finally, Ballmer mapped out a potential new scenario in the IT industry.

“Our industry spends a lot more time talking about changes to come with existing technologies, such as how do we make a faster processor, and how do we increase the screen resolution,” he said.

“However, the real innovation is changing the way people work [and] use technologies.”

The energetic CEO, who joined the firm in 1980 as its 30th employee, also used the platform in Seoul to promote Windows 8 OS, the highly anticipated update of its flagship operating system.

Microsoft made Windows 7 readily available worldwide in late 2009, less than three years after Windows Vista hit the market, then took some time to build an ecosystem that could potentially prevail over the next three decades, he said - indicating the seismic shift that Windows 8 may represent.

This is a significant time frame given that the U.S. software titan introduced its first Windows system 27 years ago in 1985.

It will also facilitate the utilization of cloud technology through its indigenous SkyDrive and various applications available at the Windows store, he added.

Industry speculation is rife that Windows 8 will come out this year. Microsoft said a preview version will be ready early next month.