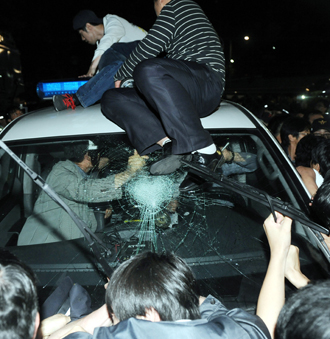 Prosecutors yesterday confiscated computer servers from communication firms that contain the membership list of the Unified Progressive Party - including personal information such as donations to the party - as they continued their investigation into an allegedly rigged primary in March.

But they failed to get into the party’s headquarters in Daebang-dong, southern Seoul, due to fierce resistance from party leaders and members.

The standoff, which began Monday, lasted 18 hours until the raid was called off.

The party, which was imploding over the rigged primary issue before the raids, accused the government of persecuting it for political reasons, and worried that the information about its members would be used for political aims, like trying to ferret out civil servants and teachers on its rolls. 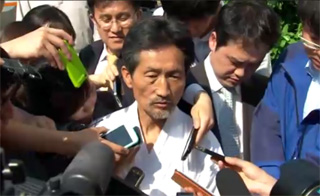 In the successful raids, prosecutors and investigators stormed three private communication companies in Seoul and confiscated three servers from two of them, which had lists of all UPP members, including names, telephone numbers, addresses and membership fees paid, and also the electoral rolls from the disputed primary.

UPP members somehow learned of the after-midnight raid on Smile Serve Co. in Gasan-dong, western Seoul, and attempted to snatch the servers and prevent investigators from leaving the scene.

Roughly 400 policemen scuffled with about 200 party members who were trying to block them from taking the materials. When investigators got into a police van, UPP members moved seven cars to block their exit. Some members climbed on the van’s roof and lay on top. Someone shattered the van’s front window.

At around 2:20 a.m., more policemen arrived on the scene and dragged the protestors from the van. The investigators managed to escape.

However, the 27 prosecutors and investigators who were sent Monday to the UPP headquarters in southern Seoul failed to get into the office due to protests by about 100 party members. Party members locked the door to the office and staged a sit-in protest before it. Policemen blocked the entrance of the building and brawled with some party members outside. After remaining on site all night long, the prosecution officials called off the raid yesterday morning.

Angered by the violence, the prosecution said it will track down everyone involved in the protests and punish them.

“We will thoroughly analyze evidence of the interference with public affairs and the violent acts that happened in the process of the raid,” Im Jeong-hyeok, a senior prosecutor of the Supreme Prosecutors’ Office, said at a briefing yesterday.

“In the process of [our] confiscation of the servers, hundreds of party members lay in front of the van and broke its window, which interferes with the performance of our official duties.”

Kang Ki-kab, one of two temporary leaders of the party chosen by its smaller faction, condemned the raid and called it “a political act.”

“The prosecution committed an act to rob the heart [the list of party members] of a political party, which can’t be allowed under the Constitution,” Kang said.

“The prosecution has become the slave of the administration,” he said, “and they tried to interfere with the alliance of opposition parties ahead of the presidential election.”

The country’s third-largest party, which won 13 parliamentary seats in the April 11 general election, has been on the brink of imploding over the allegation that its March primary was rigged, an assertion of the smaller faction that is denied by the larger. The smaller faction says all proportional candidates elected in the primary should forfeit their positions.

So far, four candidates who ran in the primary, including the de facto leader of the larger faction, Lee Seok-gi, are adamant on keeping their positions. The leadership appointed by the smaller faction said yesterday it will announce today whether it will expel the four candidates.

The raids briefly united the factions, who didn’t want their electoral rolls to land in government hands.

Prosecutors said they will use the rolls only for their own investigation into the primary rigging.