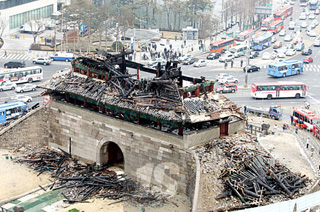 State auditors have found a flaw in the design plan for the restoration of a landmark ancient gate in central Seoul, warning of a potential risk of damaging the gate if fully restored, officials said yesterday.

Korea started rebuilding Sungnyemun (“Gate of Exalted Ceremonies”), its No. 1 national treasure, in 2008 after the 14th century gate was destroyed in an arson attack by an elderly man with a history of mental illness. The restoration is set to be completed by the end of this year. Wrapping up an inspection into the Cultural Heritage Administration, which is in charge of the restoration, the Board of Audit and Inspection (BAI) found that the design for a portion of the gate’s roof was not based on a traditional architectural technique, BAI officials said.

The wooden portion of the roof is aimed at preventing water leakage and subsidence of roof tiles, but a non-traditional design could cause the wooden portion to rot because of a ventilation problem, the BAI said.

The problem was raised at a meeting of technical advisors in July 2009, but the administration did not change the design, according to the BAI.

The BAI recommended the administration change the design to one based on the traditional architectural technique, officials said.

Officials said the rebuilt gate will be equipped with high-tech fire detection systems. In February 2008, a 70-year-old man who was later convicted of arson, torched the gate, more popularly known as Namdaemun, in protest over a land dispute.

The two-tiered, colorful wooden structure atop a stone base was built in 1398 as the southern gate of the walls that surrounded the capital city during the Joseon Dynasty (1392-1910).