CHANGWON, South Gyeongsang - Prosecutors will summon associates of the elder brother of the late President Roh Moo-hyun to look into the nature of a large sum of suspicious money found in their bank accounts and traces of dubious transactions linked to them.

A senior prosecutor from the special unit of the Changwon District Prosecutors’ Office made a revelation last week that investigators have discovered tens of billions of won in the bank account of an alleged money manager of Roh Geon-pyeong, elder brother of the former president.

Lee Jun-myeong, the prosecutor, said that the discovery was made while investigating Roh for other corruption charges.

According to the local prosecution, the money was held in a bank account belonging to Park Seok-jae, a younger brother of Park Yeong-jae. A high school alumnus of Roh, Park Yeong-jae was also known by the nickname “Roh’s butler.” 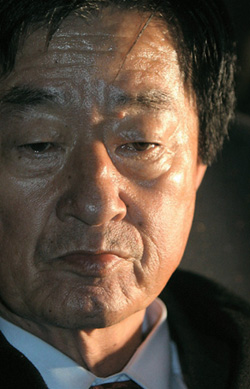 The prosecution said Park Seok-jae’s company had two bank accounts, and one of them had a series of suspicious transactions.

Records showed that the transactions were the most frequent from 2005 to 2007, while Roh Moo-hyun was in his office. Every month, up to 500 deposits and withdrawals were made, the prosecution said.

The records also showed that 13 billion won in total was withdrawn in cash, without any other documentation of the spending. Other transactions were mostly marked as dealings with business partners or payments for employees.

On Oct. 21, 2005, 600 million won was wired from Park Yeon-cha, former chairman of Taekwang Industrial and one of the wealthiest patrons of Roh Moo-hyun.

The investigation into alleged bribery dealings between the former president and Park was halted after Roh committed suicide on May 23, 2009.

As of now, the account had a balance of 2.6 million won.

“It is Park Seok-jae who owned the bank account,” Lee of the Changwon District Prosecutors’ Office said Monday. “But we have to investigate further to see if Roh Geon-pyeong is the actual owner of the money or not.”

The prosecutors will summon the Park brothers next week to question them about the bank account.

Earlier this month, the prosecution questioned officials of two banks that conducted business with the Parks.

The prosecution suspected that Roh Geon-pyeong had managed his slush funds through the brothers.

He was accused of receiving money from businessmen in return for his influence while his younger brother was in office.

The prosecution also began looking into the money flow linked to Dongbu Steel, which Park Yeong-jae took over by receiving 5.8 billion won in loans in March last year.

Roh Geon-pyeong flatly denied having any ties to Park’s bank account. “The money has nothing to do with me,” Roh said. “I have no knowledge about the bank account.”

Park also said he has never made any money deals with Roh and his younger brother’s bank account was never used for any dubious transactions.

As the prosecution made the accusation against Roh on the eve of the third anniversary of Roh Moo-hyun’s death, which falls today, the Democratic United Party issued a statement that the Lee Myung-bak administration was trying to make Roh a scapegoat to block the political storm approaching Lee’s elder brother.