Rapist first to be chemically castrated

Rapist first to be chemically castrated

For the first time in Korea, the Justice Ministry ordered a sex offender to be chemically castrated for raping multiple underage girls. 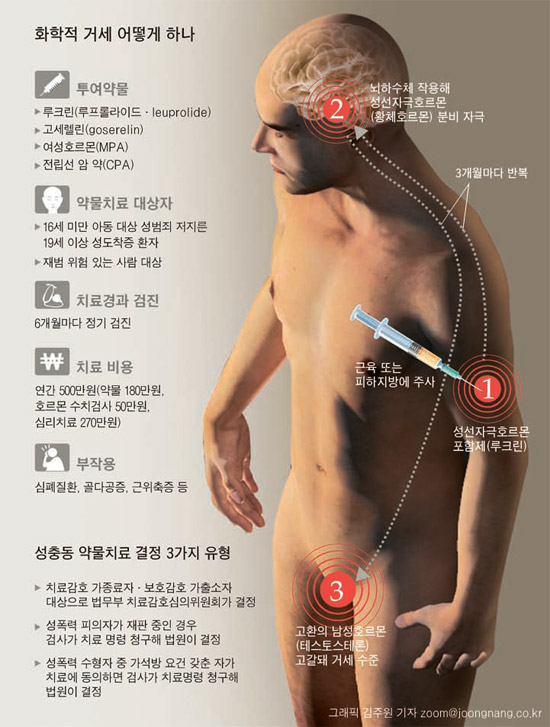 The Forensic Psychiatry Deliberation Committee, under the Ministry of Justice, said yesterday that they have decided to chemically castrate a 45-year-old sex offender surnamed Park during a committee meeting held on Monday.

Park is the first sex offender to receive the punishment since the law was passed at the National Assembly in June 2010 and went into effect in 2011. The ministry said that Park will be administered drugs, including Leuprolide, which reduces sex drive, compulsive sexual fantasies and capacity for sexual arousal through hormone manipulation.?

The committee said that the law applies to sex offenders who are thought to be likely to commit another crime when reentering society.

“He is categorized as a sexual deviant, one who especially targets underage children,” a spokesman of the ministry said. “The members of the committee unanimously voted to carry out the punishment.”

Park will be injected once every three months over the next three years and participate in psychotherapy sessions. Places designated as childcare facilities such as schools and day care centers are off-limits to Park.

He will also be forced to wear an electronic anklet that will identify his whereabouts if he leaves his government-supervised housing.

Park will receive his first treatment on July 23, three months prior to his release, as it takes two to three months for the treatment to take effect. Park was convicted four times for sexually assaulting or raping children under the age of 13.

He was imprisoned for an attempted rape in 1984 and also arrested for raping a child in 1991 and 1998. He was then sentenced to 10 years in prison - three years imprisonment and seven years of care and custody where he received therapy - at the No. 3 Northern Prison in North Gyeongsang after being caught in 2002 for raping a 10-year-old girl outside of a factory in Seoul.

Chemical castration is intended to treat sex offenders who are 19 and older and who have committed crimes against children younger than 16. The implementation of the punishment can either be decided by a court or the deliberation committee. If a sex offender who is ordered to receive the injection escapes government supervision or tries to counteract the effects of the medication, the offender will be imprisoned for seven years or have to pay 20 million won ($17,200) in fines.

The ministry estimated that the cost of the treatment is about five million won a person per month. The medication costs 1.8 million won, follow-up tests cost 0.5 million won, and psychotherapy sessions cost 2.7 million won. People in the medical circle worry about the treatment’s side effects, saying that Park might experience osteoporosis or muscular atrophy.

“We do not worry about the side effects because Leuprolide is currently being used to treat prostate cancer,” Kim Hyeong-ryeol, a spokesman for the ministry told the Joongang Ilbo.