Recreation of DMZ wins gold at the Chelsea Flower Show

Recreation of DMZ wins gold at the Chelsea Flower Show 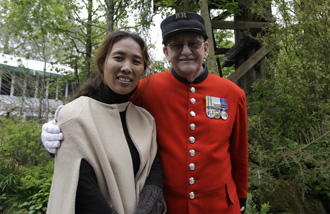 A garden designed to reflect on the tragedies of the 1950-53 Korean War and the power of nature to revive itself from the ruins has won a gold medal in the Chelsea Flower Show in London.

It is the second time that Hwang has grabbed a prize at the world’s biggest flower show. Last year, she won the top award in the Artisan Garden category with “Hae-woo-so” inspired by the traditional Korean toilet and the country’s old philosophy that cleansing the body is akin to cleansing the mind.

This year’s “DMZ Forbidden” garden is “going to be a symbolic place honoring everyone who suffered because of the war,” Hwang said in an interview with the Korea JoongAng Daily in December in her studio in Gwangju.

The garden is a recreation of the Demilitarized Zone between North and South Korea, which has been kept nearly untouched for six decades since the 1953 Armistice Agreement. The zone has become a diverse habitat for various kinds of rare plants and animals.

To Hwang, the DMZ has become the “most beautiful garden on the planet,” though it symbolizes the legacies of the war and the tragic division of the Korean Peninsula at the same time, the artist said in the interview.

“The DMZ was formed organically after a major upheaval. It was created because of the war but is now a symbol of peace.”

According to a press release issued by Hwang’s agency on Tuesday night after winning the prize, 60 percent of the plants in the “DMZ Forbidden” garden are from Korea and some of them are indigenous to the DMZ area.

Hwang said that some of the British veterans of the Korean War she met last year talked about plants they saw in Korea, and they asked her to find them.

“There are six plants that are indigenous to the area near the DMZ, including Geumgang chorong [a type of bellflower], and they will all be part of the garden I’m creating,” she said during the interview in December.

“This is my way of thanking the veterans.” 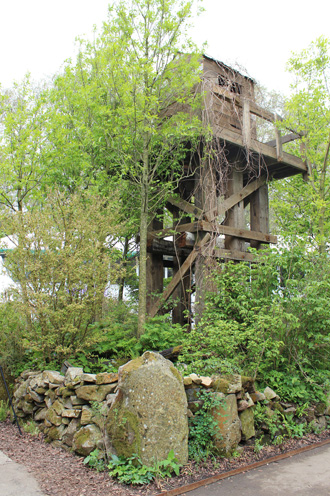 A watchtower in the “Quiet Time: DMZ Forbidden Garden” designed by Hwang Ji-hae for the Chelsea Flower Show in London. The garden reminds viewers of not only the tragedies of the 1950-53 Korean War and the lasting division between North and South Korea, but also of the power of nature to recover from the ruins and heal people injured by the war. [YONHAP]

The garden also has benches made of thousands of dog tags and a path made of buttons from military uniforms, reminding viewers of their sacrifice.

At the press preview on Monday, the Korean War Chelsea Pensioners, the residents of the Royal Hospital, in their bright red overcoats visited the garden and posed with members of the British Korean Veterans Association, adding a nostalgic touch.

Other gardens for the 99th Chelsea Flower Show burst into full bloom in London this week, despite one of the driest winters and wettest springs in Britain for decades and a tough economic environment sweeping Europe.

Severe drought in the southeastern English region that includes London has led to the imposition of water restrictions and Chelsea designers have responded by making responsible water use one of the show’s key themes.

Caroline Spelman, the British secretary of state for the Department of Rural Affairs and Food and a keen gardener, visited the Climate Calm garden, an installation that showed the effects of climate change in the water-stressed southeast.

“I feel I’ve learned a lesson as a gardener for this year and for all future years, which is to think carefully when I’m making choices about which plants use water sparingly, so that I, too, can use water wisely,” she said to Reuters.

The show, which takes place on the sprawling lawns between the red-bricked elegance of the Royal Hospital, a 17th-century retirement home for army veterans, and the River Thames, draws in over 150,000 visitors each year.

This year, with the London 2012 Olympics fast approaching and the nationwide celebrations for Queen Elizabeth’s 60th anniversary as monarch two weeks away, the show had a definite patriotic feel to it.

Union Jack flags were ubiquitous, dotted around displays, woven into patterns in the flowerbeds and even adorning the jackets, T-shirts and dresses of attendees.

The Great Pavilion, the central display tent, housed over 150 exhibits and thousands of flowers, where the heady scents of lilies, roses and other garden favorites vied with wafts of expensive perfume for supremacy.

Perhaps also reflecting the more sober economic backdrop, there was a greater number of visitors clutching cups of upmarket tea or coffee than the more usual champagne flutes.