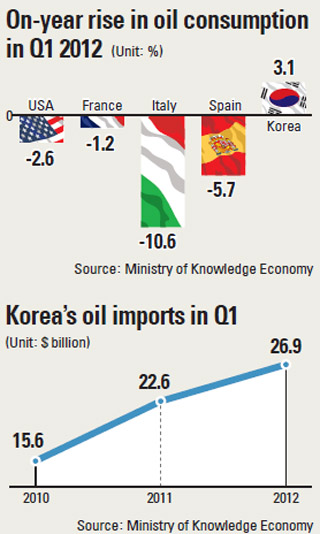 The Ministry of Knowledge Economy yesterday announced a package of measures to reduce local oil consumption.

The move came after Korea saw a 3.1 percent rise in gasoline and diesel use in the first quarter, while use in many other countries declined.

The measures include extending a tax break on the purchase of compact or hybrid vehicles and granting more tax rebates on public transportation fees.

The government will also offer financial support to businesses that trade in gas-guzzling cargo trucks for new and more fuel-efficient ones.

“It is important to promote cutbacks on energy consumption and also to promote more efficient use to lower the country’s dependence on oil,” said Lee Gwan-seop, director general of the MKE’s office of energy and resources, during a press briefing yesterday.

Rising oil prices prompted the measures. The price of Dubai crude oil hit $122.5 a barrel in March and is still above $100 a barrel. Although prices have stabilized, gas is still selling at over 2,000 won ($1.71) per liter at the pumps.

Since early this year the government has been promoting altteul or “thrift” gas stations that offer gasoline at a cheaper price.

The government has set a target of reducing the share of energy generated by oil from the current 37.5 percent to 33 percent by 2015.

“The manufacturing industry consumes more oil than any other area,” said Lee of the ministry. “However, it is more efficiently managed, while energy efficiency in the transportation sector falls far behind.”

Lee said that for the government campaign to work, it’s necessary for the public to change how it consumes energy.

Subway, bus and train commuters will get a 30 percent tax rebate when using their credit cards to pay for transportation starting next year.

Currently, only debit and check card spending on transportation qualifies for the 30-percent tax return.

The total amount of rebates will be increased to 4 million won from the current 3 million won.

The government has extended the tax break on purchasing a hybrid car for an additional three years. The tax benefit, which could lead to a savings of up to 3.1 million won for a car-buyer, will expire after 2015.

Local taxes will be exempted for people buying compact cars that are relatively fuel-efficient.

However, parking costs are expected to go up. The exact date for the rise has not been specified.

The government also wants to cut down on the number of taxis cruising around looking for customers and wasting fuel.

It says it will set up a national phone number for call taxis. Only 35 percent of the taxi rides in Korea are by call taxis compared to 70 percent in other developed countries, according to the government.

The Seoul Metropolitan Government also announced that it will begin checking buildings that have their air conditioning set below the government-advised 26 degree Celsius.
By Lee Sun-min [summerlee@joongang.co.kr]