“War of the Arrows” to target Japan

“War of the Arrows” to target Japan 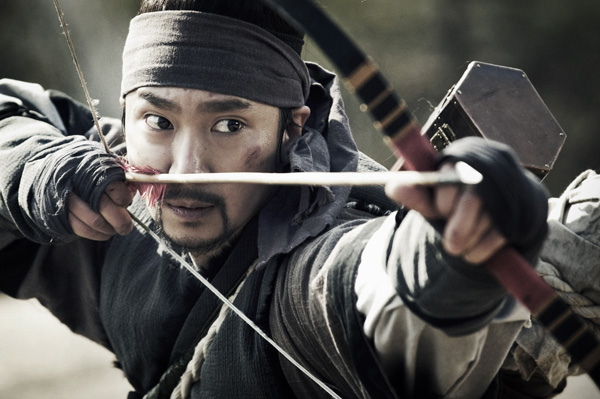 The hit Korean movie from last year “War of the Arrows” is set to open in cinemas in Japan on Aug. 25. The movie has been given a new title of “Kamiyumi” for the Japanese market.

The movie starring actors Park Hae-il and Ryu Seung-ryong drew in an audience of more than 8 million last year making it the biggest grossing Korean film of 2011.
The movie won various awards at the Daejong Film Awards as well as the Blue Dragon Film Awards in Korea.

Set during the second Manchu invasion of 1636, “The Ultimate Weapon” combines dazzling special effects, a tense plot line and the thrill of the chase to tell the story of master archer Nam-yi (Park Hae-il) and his quest to rescue his sister Ja-in (Moon Chae-won) from the Qing Dynasty.
Director of the film, Kim Han-min, is well known for his work on the 2009 thriller “Handphone,” and lead actor Park Hae-il rose to fame with his role as a serial killer in the 2003 hit movie “Memories of Murder.”

Ahead of its Japanese launch, the film’s official Japanese Web site was launched, prompting much curiosity among Japanese moviegoers.
By Carla Sunwoo [carlasunwoo@joongang.co.kr]