To Korean men, every inch counts

To Korean men, every inch counts

Jeong Nam-jin, a 31-year-old bachelor living in Doksan-dong, western Seoul, has been rocking Nike Air Force 1 mid-tops for the past three years. He’s a maniac for the classic kicks, but the real reason he sports the off-white shoes is because there are few other choices that allow him to sneak in an extra few inches in height.

“I’ve been trying so many different dress shoes and sneakers, but this is the best pair I can insert a layer of height-increasing insoles into,” said Jeong, who is 162 centimeters (5 feet, 3 inches) tall - 12 centimeters shorter than the average Korean man.

“If you pick the wrong pair of shoes like low-tops, it’s hard to insert the height increasers. You can still insert them, but it’s impossible to walk around,” added Jeong, who’s been using a variety of padding for over eight years.

The sale of height-increasing insoles has been rising steadily in Korea, with the expanding market leading companies to sell dress and casual shoes with the elevated padding already stitched in. This trend has enabled shorter men to stand as much as five to six inches taller without showing how.

And elevated shoes are just one solution to height insecurities.

Distraction osteogenesis - the process of splitting a long bone into two in order to extend it through consolidation - was originally used as a medical procedure to restructure skeletal deformities.

One method that involves an intramedullary skeletal kinetic distractor (ISKD) was developed specifically for dwarfs. An ISKD is a rod that is inserted into the leg and gradually extends in response to normal movements. Because the ISKD is inserted inside the leg, patients avoid scarring and risks of infection typically associated with external pins and wires.

The surgery, which costs up to 50 million won ($43,000), allows patients to gain between five and six centimeters in height. It takes up to two years to recover from the surgery and if there are complications, a patient might never again walk or run. Even after full recovery, physical sports are discouraged.

Yet the limb lengthening surgery is still viewed as an option by some Korean men looking to boost up their height. One thriving clinic, New Born Orthopedics in Sinwol-dong, western Seoul, said most of its patients undergoing surgery are motivated by appearance.

“Eight or nine out of 10 men undergoing surgery are doing so not because of deformities or disabilities, but because they want to become taller,” a counselor at the clinic said. “The thing is that they aren’t even extremely short. They are around 170 centimeters tall.”

Surgically extending leg bones is certainly an extreme path, but the desire to become taller is a widespread phenomenon. For Jeong, the Air Force 1s with outsoles an inch thick and room for padded insoles were an easy, effective and safe solution.

“Back when I was young, I used two or three height increasers at the same time, but I don’t do that anymore,” he said. “You can’t imagine how tiring it is.”

Jeong said he was insecure about his short stature when he was in his 20s, but he now feels comfortable about his height and his use of padded insoles.

The most embarrassing moments were when I had to take off my shoes and sit on the ground when eating out with my friends and colleagues. I went to the bathroom first and pulled out all the height increasers so that no one would see that I used all these weird things,” Jeong recalled.

“I’m not proud of my height increasers, but now I’m not ashamed of using them anymore because everyone talks about kinopi these days.”

Kinopi, which translates to “height increasing,” refers to shoes with padded insoles stitched in. A few types of kinopi shoes were manufactured in the ’90s and early 2000s, but in recent years they have become common store items.

In the media, the shoes are often mentioned by vertically challenged comedians and boy band members as they poke fun at themselves. 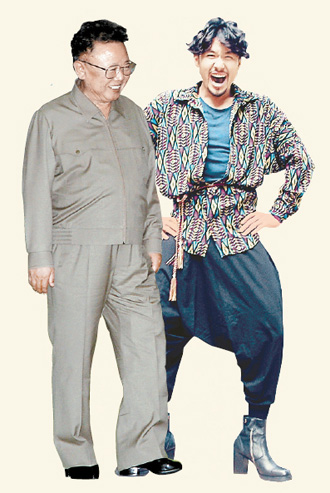 “Shoes with moderate heels between three and five centimeters are the best-selling fashions, but some order extreme products inspired by No,” said a customer service official from No’s Web site.

Other celebrities like Rain and Jang Dong-gun, who are taller than 180 centimeters, also wear kinopi dress shoes.

And as demand has increased, supply has followed suit. Entrepreneurs Kwon Myeong-il and Lim Byeong-jo, who are both more diminutive than the average Korean man, launched their own online shopping malls dedicated to men shorter than 170 centimeters. Kwon said he always had a hard time finding clothes that fit while Lim said he was discouraged when he was forced to quit ballet because of his short stature.

Both shopping malls - Hobbit Town run by Lim and Short Men run by Kwon - now have 100,000 members and make about 20 billion won ($1.7 million) in annual sales. The two shopping malls offer fashion items from A to Z, but the most popular are elevator shoes and height-increasing insoles.

Kim Jong-kyung, another entrepreneur who sells elevator shoes online, said the market has grown significantly over the past few years. He started to sell shoes online in 2004.

“When I first started the business, just a couple of elevator shoes were available, which is starkly different from now. Sales soared remarkably around 2008 and the market has gotten a lot bigger.

“I believe the market still has high potential. Once you start to wear kinopi shoes, you will never come down.”

Indeed, coming down may prove tough for Korean men, who live in a society in which height and appearance are viewed as success-making qualities.

A man surnamed Kim was turned down by a matchmaking company because his 158-centimeter stature is far shorter than that of the average Korean man. Humiliated, Kim filed a petition and the National Human Rights Commission of Korea recommended the matchmaking company revise its rules regarding height when accepting male members.

And even when short men like Kim are allowed to join matchmaking services, the companies say these people have fewer chances of winning over the hearts of their dates, even if they pay millions of won.

“You know, men these days are really tall and women prefer tall guys over shorties, so he will have fewer chances of going on dates with women even if he joins the club,” said a counselor at a matchmaking company.

The average height of Korean men was 174 centimeters as of 2010, the tallest among Asian males. But many of them still seem to want more.

“Koreans tend to base their identities on their appearances. And they always want to catch up with others,” Hwang said.

But is there a link between one’s success and height? Research conducted by Anne Case and Christina Paxson, professors from Princeton University, found in 2008 that four inches of height was correlated with a 10 percent increase in income. Similar research was conducted in Korea by Park Gi-seong, a professor of economics at Sungshin Women’s University, who researched 1,548 male employees who were in their 30s and 40s last year and found that hourly wage increased 15 percent per centimeter.

Whether the statistics are simply coincidence or causation rather than correlation, Korean men aren’t taking a chance. Kinopi sales are feeling the benefits.