Floating funds amass due to paucity of viable options

Floating funds amass due to paucity of viable options 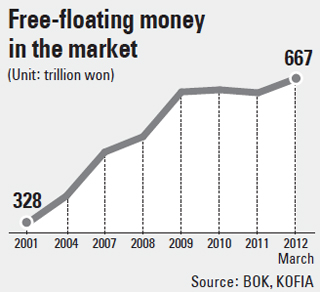 A 62-year old surnamed Cho took 130 million won ($111,000) out of a long-term deposit in December. Frustrated by the lack of viable alternatives given the state of the local stock market, he invested it in a money market fund (MMF).

Six months later - and with the benchmark Kospi taking another gut-wrenching tumble last week - he still views the move as a sensible one.

“Depending on paltry interest returns from bank deposits feels more like eating a loss nowadays considering the rate of inflation and tax payments,” he said. “And savings banks are unreliable, despite the slightly higher interest rates.”

Cho said he had struggled to find attractive options for his money on the main bourse, which has been on a roller-coaster ride since the sovereign debt crisis flared up again in the euro zone. Moreover, the domestic real estate market has been stagnating since 2008 despite government efforts to pump life back into the market. The yield on three-year Treasuries is 3.3 percent, close to the rate of inflation.

As investors grind their teeth over where to put their cash, more than 600 trillion won is now floating in the market without a clear sense of direction. According to the Bank of Korea and the Korea Financial Investment Association, 667 trillion won was tied up in short-term investments as of end of March, up 5.3 percent from the end of 2011.

This is more than double the 300 trillion won of floating investments seen in the early 2000s. The total sum shot up dramatically in the wake of the 2008 credit crunch.

A considerable share of the money released in the market as part of the government’s stimulus package is believed to be tied up in short-term investments with a maturity of less than six months including MMFs, certificates of deposit (CDs) and cash management accounts (CMAs).

Experts say instability has driven investments in short-term products, creating the risk of a bubble that could throw the market into chaos - as was the case with the tech-heavy Kosdaq and the real estate market in the early- and mid-2000s.

“There’s a possibility that investors could rush to certain short-term prospects and cause their value to spike to irrational levels,” said Sung Tae-yoon, a professor of economics at Yonsei University. “Furthermore, vast market liquidity could cause a sharp rise in consumer prices when the economy recovers.”

Some pundits argue that so much free-floating cash threatens to kick the wind out the economy’s sails. They urge stronger measures to kick start the real estate market while also calling to raise the key borrowing rate. Others believe the money should be channeled into the manufacturing sector.
By Sohn Hae-yong [ojlee82@joongang.co.kr]