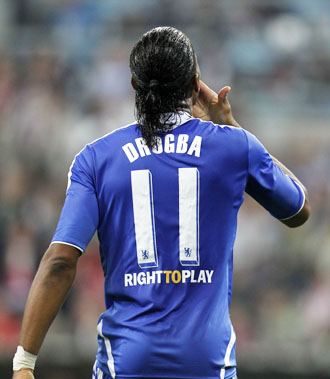 LONDON - After maddening and thrilling football fans in equal measures for eight years, Didier Drogba’s combustible Chelsea career is over.

And it was fitting that one of football’s most theatrical characters went out with one final, dramatic flourish.

With the last kick in his last game, the 34-year-old Drogba won the Champions League for Chelsea on Saturday, scoring the decisive penalty in the shootout against Bayern Munich.

“Even the greatest stories come to an end,” the Ivory Coast forward wrote Tuesday on his official Web site. “My contract is finished and I am now prepared to leave the Blues. It is with great sadness but also with much gratitude that I announce [to] you my departure from Chelsea.

“I played my last game for the club in Munich and I am delighted to have finally been able to lift the Champions League trophy after an incredible final.”

“[Leaving] has been a very difficult decision for me to make and I am very proud of what we have achieved,” Drogba said. “But the time is right for a new challenge for me.”

That new challenge could be in football’s new frontier: China.

The two-time African Player of the Year has been widely linked with a move to Shanghai Shenhua, which former Chelsea teammate Nicolas Anelka joined in January and now coaches.

But a career in politics could also be beckoning when Drogba hangs up his boots, having used his status in Ivory Coast to help unify a country that saw at least 3,000 people killed in postelection violence in 2010, and has seen other disorders over the last decade.

But while Drogba is regarded as something of a peace figure away from the pitch, during matches he can be one of football’s most inflammatory players.

He has infuriated fans with what they view as a habit of diving and enraged referees with his aggressive, foulmouthed conduct, earning several bans from UEFA.

Saturday’s final was redemption for Drogba after being sent off in the 2008 Champions League final loss to Manchester United for slapping Nemanja Vidic.

Chelsea was on the verge of losing a second European Cup final when he planted a powerful, late header in the Bayern net to send the game into extra time.

Despite conceding a needless penalty that was saved by Petr Cech, he more than made amends for giving Chelsea that scare when it came to the shootout. Facing the hostile Bayern crowd, Drogba coolly dispatched the fifth and last penalty past goalkeeper Manuel Neuer.

It was Drogba’s last act in a Chelsea shirt, which he ripped off before prancing in front of the visiting fans, savoring every last moment of adulation.

“Winning the game was the turning point, that’s why I decided [to go],” Drogba told the BBC.

“We’ve made a story all together, and I want people to remember that,” he added.